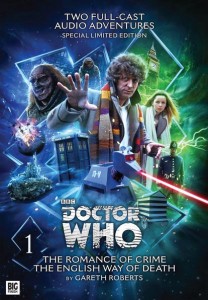 The Fourth Doctor By Gareth Roberts: Volume One (Limited Collector’s Edition)* – Starring Tom Baker, Lalla Ward, John Leeson, Graham Seed, Phil Mulryne, Miranda Raison, Marcus Garvey, James Joyce, Michael Troughton, Jane Slavin, John Dorney, Joshua Silver, Derek Carlyle, Terrance Hardiman, Richard Braine, Abigail McKern, Annabel Mullion, Mark Bonnar, Tim Bentinck & Andrew Bone, Written by Gareth Roberts & Adapted by John Dorney – 5xCD / Download (Big Finish Productions)
Sometimes it’s easy to get lose yourself the staggering amount of mythology, history and fiction that has built the Whoniverse in the last five, and now entering six, decades. Even during The Doctor’s darkest days, the desolate nineties, there were authors keeping his spirit alive and making sure that his flame still burned bright. The Doctor may very well have faded into obscurity if it wasn’t for, amongst others, the likes of Gary Russell, Justin Richards, Mark Gatiss, Paul Cornell and Gareth Roberts. And it’s Mr Roberts’ tales of the Doctor, well two of them anyway, that make up this boxset; ‘The Romance of Crime’ and ‘The English Way of Death’, both very different, both centred around the Fourth Doctor and Romana, both excellent stories in their own right and both making their dramatic debut in this collection.

‘The Romance of Crime’ opens the show, raising the curtain on a deep space prison which is about to become the subject of a police investigation as The Doctor, Romana and K9 arrive. Having been unwittingly drawn into the investigation, they find themselves caught up in a web of corruption, revenge, murder, illegal strip-mining and the seemingly impossible resurrection and return of psychotic, mutant serial killer and her underworld associates, neither of whom trust each other. It’s fast, furious, and darkly humorous; and in places, more than a little horrific, which as we all know, also means that it’s a lot of fun. But as much fun as ‘The Romance of Crime’ is, it does live in the shadow of its (slightly) superior, and funnier, big brother ‘The English Way of Death’ which lands The Doctor and his companions (although, I think, as many others undoubtedly do, that nursemaid is a far more appropriate description of the role that Romana ends up assuming in the company of The Doctor) in nineteen thirties London fighting for the future of Earth against brain eating zombies and a gaseous extraterrestrial intelligence, aided in their fight against the monsters by a company of surreptitious time “tourists”, an aging Colonel cut from same mould as Terry-Thomas, a mysterious international assassin and a crime writer anxious to follow in the footsteps of her literary creation. The characterisation is superb, playing off, and having fun with, every jolly old English cliché, while the plot, featuring a megalomaniacal alien controlling the undead in order to fulfil its wicked scheme, could have come straight from the pulp magazines of the era or a fifties Hollywood Sci-Fi B-movie which adds a sense of authenticity and period to this wonderful, mysterious scientific thriller.

Filled with the same lightly subversive, knowing humour as the Douglas Adams led era of Who and excitement and adventure galore, ‘The Romance of Crime’ and ‘The English Way of Death’ are a perfect pair of stories, which can be enjoyed separately, together, or in any order you see fit, but believe me you will thoroughly enjoy every single second of them. I did. Gareth Roberts, I salute you… Tim Mass Movement

*’The Romance of Crime’ and ‘The English Way of Death’ are available separately, or together as ‘The Fourth Doctor by Gareth Roberts Volume One’ collected edition.