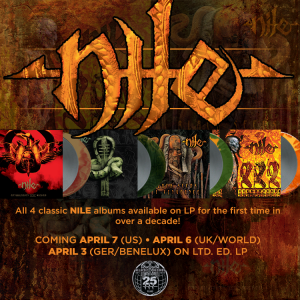 Iconic Death Metal LPs To Be Released on April 7th

US Death Metal legends, NILE will see the deluxe reissuing of their first four full-lengths via Relapse Records this Spring as part of the label’s ongoing 25th anniversary celebration. The albums Amongst The Catacombs of Nephren-Ka (1998), Black Seeds of Vengeance (2000), In Their Darkened Shrines (2002) and Annihilation of the Wicked (2005) have all been out-of-print on vinyl since their initial release, with the exception of Amongst the Catacombs…, which has been out of print for over seven years.

The deluxe reissues will each contain a digital download code of the full album and will be released on April 7th in North America, April 6th in UK/World, and April 3rd in Germany/Benelux/Finland. Pre-Orders, including exclusive colors are currently available via this location. A limited number of NILE sticker packs will be included with pre-orders for all four titles. All four albums can be heard via Bandcamp here.