Warning: preg_match() expects parameter 2 to be string, object given in /var/www/vip4/sites/vip6102689/httpd/htdocs/wp-includes/formatting.php on line 4866
 The Exploited – 1980-83 - Mass Movement
x
Spread the love 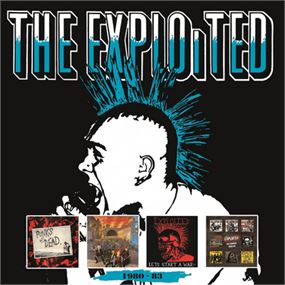 The Exploited – 1980-83: 4 CD Box Set (Anagram/Cherry Red)
A fine collection featuring three albums and one compilation disc of singles, sixty two tracks from one of punks most successful bands ever… and accompanied with a sixteen page booklet which includes detailed liner notes and a whole bunch of old school photos, relevant with each release; all tastefully packaged in a sturdy box. If you don’t own anything by The Exploited (shame on you firstly) go pick this up. The first disc ‘Punks Not Dead’ is an anarchy-fuelled barrage of total chaos. The likes of the title track alongside ‘I Believe In Anarchy’, ‘Cop Cars’, ‘Dole Q’, ‘Out Of Control’ and the anthemic ‘Exploited Barmy Army’ show exactly where Wattie and the boys stood. Vehemently delivered musically and vocally it was a leading punk album, a true flagship for the genre. Even if you haven’t heard many of the songs since it’s 1981 release, I bet you will still sing along to many word for word. Disc two features the ‘Troops Of Tomorrow’ opus, which sees the band lean more in a harder metallic tone of punk. Probably faster and more aggressive than most, it was a sound that continued to keep The Exploited ahead of the pack, and unquestionably make them stand out from others. Like Motorhead found themselves appealing to the punks, The Exploited were making waves amongst metallers (it’s this album which features the track ‘Disorder’ – Slayer chose to cover it). With the pace picked up especially during ‘Jimmy Boyle’ and ‘UK 82’ it created a very hard edge for the band, and it’s easy to understand their popularity rising between both genres. Featuring the controversial ‘USA’ and slower paced title track this gem still stands today as an album landmark, and carries a memorable piece of artwork on its sleeve. ‘Let’s Start A War… Said Maggie One Day’ is the third full album on offer here. Twelve songs of un-relentless political attack which probably doesn’t harvest any established Exploited ‘hits’ but on the whole is a completely solid album continuing with the intensities and anger the band were revelling in now – no guess as to what the band thought of the current government at the time as they lavishly dished out the dirt! Disc four completes the Box Set and includes favourites ‘Army Life’, ‘Fuck The Moods’, ‘Dogs Of War’, ‘Dead Cities’, ‘Addiction’, and the hilarious ‘Singalongabushell’. I bet even if you weren’t into The Exploited back in the day, these guys have made enough of an imprint for you to be able to recognise at least a dozen of the tunes on offer here. What a great way to replace those classic vinyls. Mark Freebase