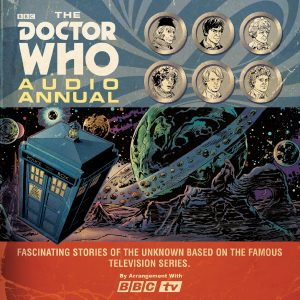 The Doctor Who Audio Annual is a gloriously odd, wonderfully heart-warming idea, dedicated to shoving a blissful look into the eyes of fans old enough to have collected the annual during the Classic years, to make them chuckle, and to make them wipe a sentimental tear from their eyes as they mourn for their lost youth, optimism and more often than not, hair.

It is what it says it is – a collection of stories and features plucked from various editions of the Doctor Who Annual, from 1966-1985, covering the first six Doctors. It gets its reason for being partly from the nostalgiafest it provokes, and partly from the oohing and ahhing that follow some of the pieces chosen to be part of it, as they chronicle what we knew and what we assumed about each Doctor, and the Doctor as an overall character as time went by. Almost every story or feature is read by an appropriate companion-actor of the day, and some real thought has gone into choosing pieces that deliver that second strand of value, as well as the first.

Peter ‘Steven Taylor’ Purves is first up, reading Who is Doctor Who? from the 1966 annual. Who Is Doctor Who? puts ‘Doctor Who’ – he’s very distinctly known as Doctor Who, not ‘the Doctor’ throughout much of the annual’s early history – in the spotlight, and, as this was three years before Terrance Dicks and Malcolm Hulke devised the Time Lords, it’s cute to look back with fifty years of hindsight and hear that the annual placed Doctor Who in a long line of human scientists, as the next giant mind after Einstein (Hmm – Steven Hawking as Doctor Who, it’s been said before). The style of the piece is very overblown, all temporal infinity and spatial eternity, but it also shows the uncertainties that still existed over the Doctor’s motivations – what’s he doing out there in the void? Is he just out to see everything, or is there some purpose? No-one knows, but he’s characterised as combining the deep curiosity of the scientist with a fierce love of all life everywhere.

The Sons of Grek, from the 1967 annual and also read by Purves, is a proper Hartnell-style adventure story – Doctor Who, landing in a kind of mechanised medieval castle, falls foul of the giant Sons of Grek, and is thrown into a pit. There, he meets the Crustians – mostly, but not entirely, insectoid life-forms that will have made readers remember the Menoptera and the Zarbi from The Web Planet, and he helps foment rebellion against the Sons of Grek. There are things to note with this story, that set the tone for several years to come – just as he’s ‘Doctor Who’, not ‘the Doctor’, ‘the Tardis’ is simply known as ‘Tardis’. Hartnell’s Doctor is also pretty lively here, leaping into ‘Tardis’ just as the ship is being pushed out of a high window, and it reads as a proper, companionless, adventure story about being individually brilliant and working together against aggressors. One of the most interesting things of course is that in 1967, the annual was still featuring Hartnell’s Doctor – despite Troughton having taken over in the lead role in 1966.

That was fixed by 1968, though, when two years into Troughton’s tenure (and only a year before he would leave the role), the annual ran The Phoenix In the Tardis, read here by Anneke Wills, in an attempt to explain the business of regeneration (known here mostly – as on the show at the time – as rejuvenation), and to list the ways in which the Second Doctor differed from his predecessor, while at the same time being the same fundamental character. The Doctor is likened to the phoenix of legend, burning up in a cycle of renewal and beginning a new life out of the ashes of the old.

The King of Golden Death, also from 1968 and read by Wills, gives us a semi-typical ‘educational’ slice of the annual, turning the story of Tutankhamun’s tomb into a second Doctor, Ben and Polly story as a way of educating the readers about Egypt, mummies, grave robbers and just a little about Egyptian religious beliefs. While it’s at it, it teaches the lesson of not taking things that don’t belong to you, as both Ben and Polly fancy a bit of glittery grave-robbing, and the Doctor, somewhat out of character in the sternness of his ‘parenting style,’ tells them he’s disgusted by them. Ben provides the moral of the story, coming to an understanding that seeing wonders is enough of a privilege, so stealing them isn’t necessary.

By 1973, we were well into Jon Pertwee’s time and Dark Intruders, read by later Master Geoffrey Beevers, has a full-on UNIT feel, Lethbridge-Stewart, Jo and the Doctor having been invited onto a ship to pick up a capsule full of people who’ve just been to Mars. The astronauts have literally spaced out though, and they’ve brought something back with them. Something tiny, and parasitical and intent on sucking dry the minds of some of the cleverest boffins on Earth. Step forward the Pertwee Doctor, always ready to put himself at risk for the sake of the Earth. Here, he undergoes one of those classic Pertwee mental battles that became a feature of later Doctors too, and wins the planet – at least for now – from the would-be invaders. Beevers, despite his later involvement with the show, feels absolutely right reading this story, perhaps understandably, given his history of reading Third Doctor Target audiobooks.

We spin on almost a decade for the next story, pitched into Tom Baker’s final season, and Conundrum from 1982, read by Matthew ‘Adric Forever’ Waterhouse, fits right into that season, with a tale of mathematics, spatial geometry and recursion as the Tardis appears to land inside itself. Like The King of Golden Death, there’s a lesson here as the Doctor and Adric go chasing distress calls, and then, seemingly chasing each other around the ever-changing Tardis interior – kids everywhere will have learned about Mobius strips from this story, and will have tried to construct the multi-strip on which its actions depend. And then they’ll have gone into school and shown off their new knowledge of improbable space-time, demonstrable with a strip of paper.

Annnnd then they’ll probably have got beaten up for being a smartarse. Which is what happened to you in the early Eighties if you listened to Adric.

The Penalty from 1983 though, also read by Waterhouse, could still probably pass muster today as a Big Finish Short Trip. In it, the Fifth Doctor experiences a fever nightmare, and we get a look into the Doctor’s mind, at his insecurities, his fears, and the terrible price of doubt and sadness and sorrow he occasionally pays for being the universe’s physician and righter-of-wrongs. It’s a fascinating peek behind the watery smile of one of the more mild-mannered incarnations, and rather foreshadows his epic departure in The Caves of Androzani, all running away and landscapes and terror and people being horrible, and a parade of his previous friends and companions visiting him in his mind to pass a kind of judgment on his life and habits. By far the stand-out contribution to the Audio Annual, it’s one that repays repeat listening.

And finally in this collection, we drop the insane-coated Sixth Doctor and the entirely American Peri into 11th century England, to visit with Saxon outlaw Hereward the Wake, in The Real Hereward from 1985, read by Peri-actress Nicola Bryant.

Purely historical stories with no tentacle-waggling aliens were rare by the time of the Sixth Doctor, so it’s fun to read one that allows the time travellers to just chill out with the locals of a different period of time – it’s a nod to the original educational strand of storytelling that was supposed to inform Doctor Who, but it’s a story which would never have worked on TV. It does though put forward a theory that probably doesn’t hold historical water – but about which readers at the time would have been hooked enough to find out more, even in the age before the internet.

The Doctor Who annual, over its first three decades, did lots of things – it made many Christmases, it showed us stories the Doctor had when he was off our screens, and it gave us the very idea of a wider universe of Doctor Who. Plus, y’know, there were crosswords and quizzes and games and things. Nobody wants an audio version of the crosswords and quizzes and games and things, but apart from that, the Audio Annual is a wonderful, surprising reminder of all those Christmases, those hours spent exploring the wider Doctor Who universe from an age before there was Big Finish, or Titan Comics, or any of the splendour of the now. Pick it up, and revel again in the feeling of a world of extra-special Doctor Who surprises, put together just for you. Tony Fyler