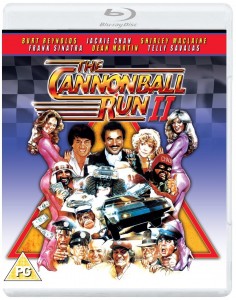 You know that old saying, ‘Lightning never strikes twice’? Most of the time, it’s right, and as hard as it tries to capture the spirit of the original film, ‘The Cannonball Run II’ never quite lives up to its processor; and unfortunately proves that well-worn adage to be right. However, that doesn’t mean it’s bad; far from it as there’s a lot to like to like about it, it’s just not as good as the first one. You know, in the same way that ‘Jaws II’ isn’t as good as ‘Jaws’. It’s a good film, but it isn’t a great film. And you know why? Because Hal Needham tried too hard the second time around. He tried to add a cohesive central plot designed to emphasise the spirit of community and fraternity that exists between the racers, but in doing so, forgot what made ‘The Cannonball Run’ great. That it was a simple story about folks driving fast and the relationships and crazy stuff that happens to them while they’re charging from coast to coast.

Having lost the previous Cannonball, the Sheik decides to organise his own race, putting up a winning purse of one million dollars in order to attract entrants. Of course, this ensures that most of the racers from the first film return for another go; but it also sets up the main story which involves Fenderbaum and Blake (Sammy Davis Jnr. and Dean Martin) owing a lot of money to a Vegas casino (which in itself is believable, because y’know, they were part of The Rat Pack), which brings in the Mob, a plot to kidnap the Sheik, steal the prize money and yadda, yadda, yadda. Which would be great if it was a strong enough plot to make you care about it; but it isn’t and it’s only saved from falling flat on its face by the always dependable and eminently watchable, Telly Savalas and a shoe-horned in slightly-more-than-a-cameo performance from Frank Sinatra. That said, Reynolds and DeLuise are in fine form (even if their romantic sub-plot involving Shirley MacLaine and Marilu Henner is a bit of a clunker) as are Martin and Davis Jnr, with both providing more than enough laughs, repartee and genuine feel good moments to keep you watching.  That and the fact that there’s some pretty good stunt action, but hey that’s exactly what you expect from a film when Needham’s sitting in the big chair. It’s good, but it’s not great… Tim Mass Movement