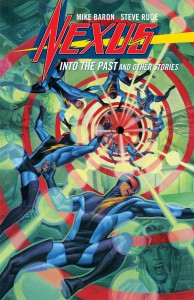 Nexus: Into The Past And Other Stories – Mike Baron & Steve Rude (Dark Horse Books)

Mike Baron and Steve Rude’s Nexus has been around since 1981 when it was first published in black and white by Capital Comics. Since then it has been through one other publisher, First Comics, before winding up at Dark Horse in 1992, where it’s been ever since. With this latest volume, Into the Past and Other Stories, we’re given the collected stories from Dark Horse Presents, with the main story being Into the Past in which Nexus travels through different time periods tracking mass murderer Clayborn. During his travels through time, he meets Sherlock Holmes and H. G. Wells and a late night TV host Oscar who is a dead ringer for David Letterman while trying to save his infant son from certain death. In Bad Moon Rising Nexus has to try and figure out what’s causing the inhabitants of Ylum, his home where he lives with his family, to go crazy, riot and commit crimes at an alarming rate. Infestation and the Insect Under the Stone once again finds Ylum under attack but this time from swarms of insects that might be coming from their own planet, while Nexus investigates a starship that has been in orbit for years which, rather mysteriously, no one has noticed before.

This is my first foray into Nexus territory, but it isn’t the first time I’ve heard of Horatio Hellpop, the assassin of the being known as Merk. While each of the stories is fun, the main tale Into the Past starts off really well, but in the final part, it crams too much in and another five or ten pages would have helped the reader emerge from a state of confusion and effectively shown how Nexus and Sundra’s son was found, instead of having to rely on the whole postcard, Holmes, Merk scenario. Artist Steve Rude’s style will always be classic in my eyes, as his lines are always clean and his panels, for the most part, are easy to understand, which helps anyone reading the book enormously. Other than the slight loss of cohesion and comprehension toward the climax of the main story, this volume is fun and is an easily accessible starting point for anyone who hasn’t read, or heard of, Nexus before, and as Sci-Fi and superhero combinations go, it’s pretty hard to beat… Jason Bonton