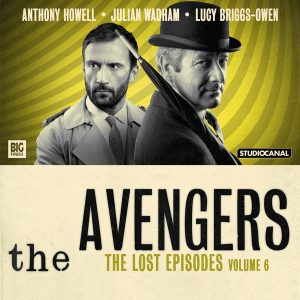 Times, trends and places may change, but good stories, they last forever. This is why The Avengers, even though it’s very much of its era in terms of pacing, dialogue and the cultural and social norms and ideas that lie at its heart, also has a curious and idiosyncratic timeless quality pulsing through its veins.  Because it’s built around, and thrives on, well written, well told tales and fantastic plots. It’s stiff upper lipped, square jawed heroes, John Steed and Doctor David Keel, always emerge triumphant despite risking all for Queen, Country, honour and decency and good always vanquishes evil in the fast moving underworld of villainy, tyranny and criminality that they protect Blighty, and sometimes even the rest of the world, from. Despite the fact that they took over the roles from the previous incumbents, it’s becoming increasingly difficult to imagine anyone other than Julian Wadham as Steed and Anthony Howell as Keel. It’s almost as if they’ve always played those characters, such is the ease with which they’ve inhabited the parts and made them their own. Of course, it isn’t all down to the performances of the leads, and always on point supporting cast, as the unfolding adventures in which they find continually themselves ensnared also contribute more than a little to the series. And in Volume Six of the Lost Episodes, Rae Leaver, John Dorney and Ian Potter have done a fantastic job of adapting, and transforming some of the original (and long since lost) Avengers stories for both the original, and a new generation of, fans.

Beginning with The Frighteners in which Keel and Steed square up to a gang of brass knuckled and cut throat razor wielding thugs who use violence and brutality as a method of extortion, Volume Six gets off to a flying start and never looks back for an instant.  It isn’t long before Steed, minus his partner who is relegated to dog sitting duties, is back in action preventing an enemy agent from wreaking havoc in one of Her Majesty’s Shipyards in Death on the Slipway.  Blackmail, espionage, secrecy and the dark hand that uses them to his advantage are the enemies that John Steed finds himself facing down in this tightly paced, pot boiler that’s steeped in a Cold War sensibility, but feels oddly relevant in the dark age of Nationalism that our supposedly enlightened society has been recently submerged in. After all, the more things change, the more they stay the same, right? Finally, this all too brief sojourn in the company of The Avengers comes to a close in Tunnel of Fear, a tale in which official secrets are whisked away into the ether and sold to foreign powers through the haunted corridors and carriages of a Southend fairground.  Once again, it’s left up Steed and Keel, with a little help from an unexpected quarter, to step into the breech and put paid to the unscrupulous machinations taking place behind the brightly painted veneers of the carnival attractions.  They don’t make them like this anymore, but after spending a couple of hours in the company of Doctor David Keel and John Steed, you’ll almost certainly wish that they did.  Tim Cundle