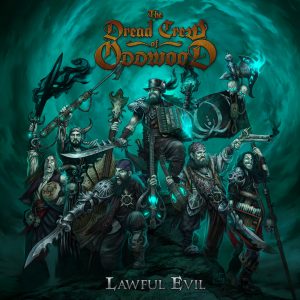 Ah, me hearties I be a little late to the party as far as these scurvy dogs be concerned, but as me old captain told me, ‘tis better to cut off a man’s leg than make him walk the plank. No, that’s not what he said was it… Aye, sorry shipmates, ‘twas “Better late than never”, that was what he said as he bled out, his guts are all infested with maggots surrounded by toothless, buxom wenches and half empty tankards of Grog.  While other bands have attempted to hoist high the Jolly Roger and capture the spirit of the raging seas, lawlessness and piracy in their tunes, none have been anywhere near as successful as this woe begotten crew of cut throats. Imagine Ensiferum unplugged playing heads down, see you at the end, full throttle sea shanties and high velocity folk music, and that’ll be where X marks The Dread Crew of Oddwood’s spot.  Sharing humour laden tales of life on the ocean, strange creatures, submarines and Trolls, The Dread Crew are probably one of the most metal bands you’ll ever hear and they don’t even need the sorcerous power of electricity or amplification to be more metal than you, me and just about every other band out there. And given the records title and some of the lyrical content, I’m almost certain that the Oddwood folks are no strangers to the seductive charm of a D20, which according to the rules of the Mass Movement handbook, means that they’re automatically awarded a million additional scene ( cough, experience, cough) points.  This is drinking and dancing music the way it should be played, full of balls out energy and dripping in the sort of battle ready anthems that Manowar have made their career from writing. Raise the flag and pass me the rum lads, it’s time I became a pirate… Tim Cundle