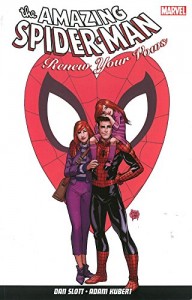 Every so often, someone in the four colour universe decides that it’s time to ignore all the fail-safes, abandon protocol, break the emergency glass and punch the big red ‘Reset’ button. While taking everything back to ‘year zero’ or obliterating a selected amount of continuity and mythology isn’t a step that anyone (least of all fandom)  takes lightly, it is – more often than not – interesting, a lot of fun and provides a convenient entry point for new fans. And even though we may grumble and moan about it, us older fans, those of us slightly longer the tooth, we secretly enjoy it as well. Why? Because it mixes everything up, allowing the writers and artists to let their imaginations run wild and create mind-blowing stories that couldn’t have happened; without a universal shake-up, previously established history wouldn’t have allowed, or made it possible for, them to happen. ‘Secret Wars’, the ongoing event in the Marvel U, is doing just that. It’s up-ending and changing everything, and not having read it, I don’t know if it’s changed the timeline, created a singular reality formed from the combined worlds of the multi-verse, whether ‘Renew Your Vows’ takes part on another earth (the inclusion of a chapter from ‘Spider-Verse’ in this book teases the audience with the possibility of the last two) or whether something entirely different has happened. What I do know however, is that ‘Renew Your Vows’, whichever version of reality or on whatever world it’s set, is a good old fashioned, action and story heavy Spidey story that’s full to bursting with crackling, vibrant dialogue and intriguing characterisation.

That’s right folks, I said old-fashioned. See, in this post / ongoing ‘Secret Wars’ Spider-Man world, Pete and MJ are married and have a daughter who has inherited all of her father’s powers.  But this is a world where superheroes are a thing of the past and are hunted by the ‘Regent’, the being responsible for disappearances of the heroes and who not only possesses all the abilities of the vanished, but who has sworn to protect every man, woman and child in New York.  However, the Regent’s ‘Utopia’ is a sham, a thinly veiled fascist society in who’s citizen’s live in fear of falling victim to, or becoming collateral damage in, one of their ‘saviours’ and his henchmen (all of who, are of course, former super-villains) ‘super-hunts’.  Having escaped his scrutiny, Spider-Man and his family are forced to surface, and with the aid of the superhero underground finally confront the Regent and expose the shocking, horrific truth about the foundation that he’s built his brave new world on.

‘Renew Your Vows’ is a frantic tale of the Wall-Crawler and his nearest and dearest, that’s both chilling and endearing. The frightening actuality in which Pete’s family find themselves living reflects the very worst of human society with the world, the Parkers included, watching while men and women are vilified, hunted down and taken away because they’re different. Given what’s happening in the real world at the moment, Dan Slott’s allegorical story takes on a terrifying sense of realism as the line between fantasy and reality becomes increasingly blurred.  Then there’s the whole Parker family fighting together part of the tale, which in almost any writers hands could have become an overly sentimental, touchy feely nausea inducing celebration of the radiation powered nuclear family, but with Slott at the controls, becomes a no-nonsense, if a little syrupy at times, super-powered slug-a-thon.  All of which is captured in magnificent detail by the incredible artwork of Adam Kubert that leaps off the page and nearly knocks you senseless. Its books like this that remind me just why I love Spider-Man. Fantastic… Tim Mass Movement