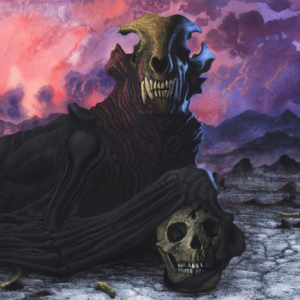 While the hallowed annals of horror fiction are filled with the works of many a worthy author, there are few, a handful at best, who have reached the dizzying, fearful heights of true immortality. Howard Phillips Lovecraft, through his creation of ‘The Cthulhu Mythos’ and his position as the founding father of Cosmic Horror, rests at the forefront of that infinitesimal number, his stories finding favour with generation after generation of rabid literary devotees. That he perished nearly penniless before receiving the plaudits that are now, rightfully, heaped upon his endeavours is one of the cruellest jokes that the Universe ever played.

Contained in the grooves of this beautiful vinyl only release are two of Lovecraft’s most famous, and arguably best, short stories. ‘The Hound’, is a tale of fearful amulets, grave-robbery, madness, things from beyond the veil and the insatiable curiosity of man and its terrible reward.  After recovering from the creeping dread instilled by first of the tales, and when you’ve regained some sort of composure, ‘The Music of Eric Zann’ (which along with ‘Dagon’ is my favourite of Lovecraft’s short stories) awaits you. A story of strange dwellings and the power of music to open far more than the hearts of its audience; it’s a genuinely unsettling account of worlds and space beyond our own and the key to traversing them, that tempts, teases and feeds the imagination, letting them fill in the ghastly gaps in all their dark detail.  Andrew Leman’s fevered, fear tinged reading and the haunting effects that accompany him, add an eerie, grim power to both offerings, a power that allows them to force their way into the blackest depths of your subconscious and plague your every thought.  Apocalyptically beautiful…  Tim Mass Movement