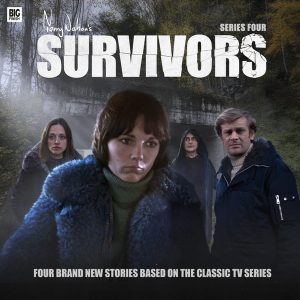 T.S. Elliot, long regarded as one of the finest poets of his or any other generation, mused in The Hollow Men about the end of the world, postulating that it would occur not with the expectant bang, but with a whimper.  Which in Survivors, was exactly what happened as humanity was all but wiped out by virus rather than being consumed in the expected nuclear conflagration;  and given the alarming rise in the number of antibiotic resistant infections that have seemingly appeared from nowhere in the twenty first century, Elliot’s words, and the scenario envisioned by Terry Nation’s series would seem to be more relevant than ever.  The end of the world though, was just the beginning. Survivors tells the stories of those who emerged (relatively) unscathed from the sickness and their struggle to forge a new world from the ruins of the old. It is, without question, one of the bleakest and darkest series that Big Finish has ever adapted, as it portrays a horrific reality that every single one of us, as terrifying as it may be, can relate to. This in turn, allows the audience to immediately identify with its everyman characters and as the story progresses, envision themselves trying to cope in a similar situation.  It’s raw, human drama as its finest, and Series Four picks up the baton passed to it by the previous seasons and continues its eternal sprint, unabated and in fine form.

Comprised of four chapters, The Old Ways, For The Good of the Cause, Collision and Forgive and Forget, Series Four goes back to the beginning, to the outbreak of the plague in order to detail and explain exactly how the government collapsed and failed to make the transition to the “new world”, before returning to the already established timeline and canon of the series. Focusing, this time, on Greg, Jenny, Jackie and Molly who in an effort to establish a working federation of communities, stumble across what at first, seems to be an idyllic settlement loosely based on the principles of Gaiansim that is, for all intents and purposes, led by the incredibly charismatic Theo. While Greg, Molly and Jackie soon fall under his spell, Jenny isn’t so easily swayed and it isn’t long before everything that seemed to be made of gold in Theo’s paradise starts to lose its veneer.  And what that surface deep beauty and shine starts to fade, the wisdom of the old adage about things being too good to be true slowly, but surely, tightens its grip on all involved. And as it increases its hold, it ensures that everything ends in chaos and destruction but also offers the survivors  a slim ray of hope for the future.

The writing, is as ever with Survivors, exemplary; effortlessly melding characterisation and plot in an immensely listenable and involving story. One that’s imbued with a profound sense of creeping dread and a gently dawning realisation that not everything is as it seems to be that continues to expand the mythology of the series. Seamlessly linking the opening tale with what, at first appear to be the unconnected latter chapters, Series Four explores, and questions, established concepts of power, tribal behaviour, religion, redemption, the strength of ideas and how even the best of ideologies can be corrupted by human nature and individual perception.  The amazingly powerful and emotional performances of the cast and superlative writing make sure that Series Four retains the slow beating heart of darkness that’s become synonymous with the series.  And it’s this blackened heart, one that favours grim reality over fantasy, coupled with the aformentioned authors and players that makes Survivors so endlessly inventive, fascinating and thoroughly addictive. Survival is everything…  Tim Cundle