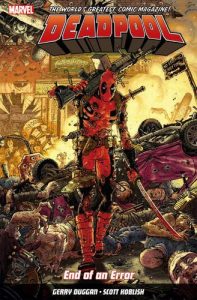 I’m sure that some learned individual once said something about money being the ruination of good men, and if Deadpool was a “good” man, then maybe he would be overwhelmed, and led down the road to wrack and ruin, by his change of fortune and newly acquired wealth.  But seeing as good is such a subjective term in Wade’s world, with one man’s Merc who saves the world being another man’s violent vigilante with a personality disorder, who’s to say whether money will really be his downfall? It might, it might not, but one thing’s for sure, whether its luxuriant embrace means he’s destined for Heaven or Hell, at least he’ll have a good time on the journey. And some balloons, a puppy and a hot dog or two. You know, to help pass the time. That said, in End of an Error, Deadpool doesn’t seem to be getting the grasp of the whole being rich thing too well, and is caught in a loop of righting minor slights and wrongs done to him rather than addressing the issues and the changes that come with his new lifestyle.  In typical Wade style, he ignores the obvious and chases the only thing he knows, the smell of gunpowder and the deeply satisfying afterglow that resonates through every fibre of your being when vengeance is yours. Which would be fine and dandy were it not for the fact that Wade keeps pursuing the same vendetta’s over and over again, suggesting that his cerebellum is even more scrambled than it’s ever been.

It’s a theme that also looms large in the Deadpool 2099 tale contained within these pages, as Wade is held hostage by his criminal mastermind “daughter” who having assumed his identity is waging a one-woman war against law and order with the aid of her gang of thugs and would-be-gangsters. Held prisoner until he reveals what he can’t remember, Deadpool is also being sought by another masked “hero”, and as opening chapters go, and being buoyed along by a lightning quick plot that’s full of wise cracks, it’s a two thumbs up classic.

That’s not all though folks, as packed between the covers are individual stories of the members of Merc for Money, Wade’s new team and each one is as just as insanely entertaining as you’d hope it would be and serves to introduce the team, and flesh out its members in ‘Pooltastic style. Once their tales are told, it’s time to introduce the Mexican Deadpool, Masacre, who battles the underworld overlord, Skull of Jade in a full throttle, ode to the badly dubbed video epics of the eighties (which usually starred Terrence Hill and Bud Spencer) that manged language and action in equal proportions. Brought to life by a creative team of truly epic proportions, End of an Error spins a whole host of darkly humorous, rib tickling and organ bursting stories, that look good, hit all of expected Merc With A Mouth marks and high-spots and are exactly the sort of tales that we, the Deadpool faithful, have come to know and love.  Wadetastic… Tim Cundle