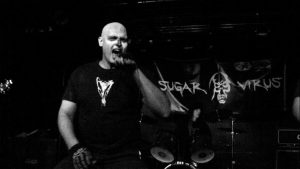 Sugar Virus is a band from the wild and woolly land known as Atlanta, Georgia. Their style encompasses the sounds of all phases of Glenn Danzig’s career simultaneously. While this may make some bands sound like a cheap ripoff, Sugar Virus makes it work, creating music that should please any fan of The Misfits, Samhain and Danzig. Jason Virus was kind enough to spend time answering my questions so that we would all know more about his band and his life. Thanks Jason!

MM: Sugar Virus sounds like a band that’s heavily influenced by Glenn Danzig’s career from the Misfits, Samhain and also his solo career. Is this correct? What are your other influences?

Jason Virus: It’s a strange thing, I moved to this country when I was eight or nine years old back in 1982. I remember going to school as a kid and being introduced to Punk and Metal t-shirts and stickers. All the reject kids and weirdo’s were into metal/punk and I was always getting my ass kicked by the black kids and the rednecks, pretty much on a daily basis at school.  It was a natural fit to fall into the punk and metal scene through the new friends I acquired at school. Absolutely loved the Misfits the moment I heard them. Something about the voice and the feel of the music. My dad was an old country music fan and loved old Hank and Elvis so we were always listening to stuff like that as well. I really started getting into Minor Treat, Black Flag, Crass, Sex Pistols, The Exploited …etc. but my favorites were Samhain and The Misfits. Later on I found KYUSS and Tool, my taste in music is all over the place but my roots are in old school punk rock.

MM: What is the meaning behind the band name? Is it some strange, mosquito-borne diabetes?

JV: Lol, nice! No, we were originally called “THE FIENDS” when we started this back in 1992 but Glenn told me the name belonged to someone else and I should try to come up with more of an original sounding band name. We have a song called SUGAR VIRUS and my younger brother (who was playing bass at the time) actually thought it would make a cool band name, so we went for it. We knew this girl who was into heroin and she was cute as hell but everyone knew she was a bit fucked up, we all called her “the Sugar Virus”. Probably a mean thing to do, wrote a song about her and now it’s our band name.

MM: You originally came from New Zealand. Why would a kiwi living in paradise move to Georgia of all places. Were you fleeing from all of the deadly animals that live on your island home?

JV: Lol, my dad was an outlaw…outlaws live in Georgia. Dad was a wanted man in three countries (and till this day, a wanted man from the Canadian Mounties). He needed a place to hang his hat and shoot off his guns…Georgia! 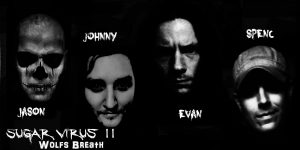 MM: Has Atlanta’s music scene been good for Sugar Virus?

JV: We have moments where the Atlanta scene embraces us. We are more into underground shows and a lot of the Atlanta bands we grew up with and played shows with just don’t exist anymore. And venues are starting to cater more and more to hip hop or really shitty hipster type bands.

MM: Wolf’s Breath is a great album full of fun tunes. How long did it take to put it together?

JV: The album was written in about two to three months. Recorded in four or five months on and off. I can put an album together in a few weeks but I have been letting the music rest weeks on end. I’ll write something on a Friday and then leave it alone for a week or two then come back to it and see if my thoughts have changed or see if I feel any need for improvements, new writing process which I feel has been working for me lately.

MM: Will you tour to support the album? When can I expect to get to see SV live?

JV: Absolutely! We have been waiting for things to cool down a bit and we are in the process of putting shows together. We have plans on doing small tours (four day weekends here and there). All my guys have careers and I myself work for the Fire Dept, so I have to work around everyone’s work schedule. 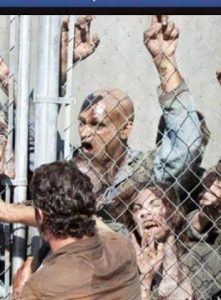 MM: Aside from playing music you’re also a bit of an actor. Has your time as an extra on The Walking Dead allowed you to meet any of the stars of the show? Have you touched any of the hotties?

JV: Yeah, I am also a huge horror fanatic. Getting to meet people you look up to in the film industry gets crazy sometimes. Getting stuck sitting next to George Romero or Tom Savini for over four to seven hours at conventions or working next to Nicotero on something like The Walking Dead is mind blowing. The actors are very respectful to all the extras, they understand this is as important as what they do. Nothing but love for all the main actors on TWD, great people and they treat you like family.

MM: If you had a choice would you prefer to be a famous actor or a famous musician? Why?

JV: Good question…well since I am not that good an actor, I would go for famous musician…ha! I feel in my own way, I am doing what most people only wish they could do. I am good at what I do musically and I feel that most people who take the Pepsi challenge with our band VS. some other band similar to ours will pick our band hands down. Its second nature to me, I can write a song (music, lyrics and vocals) almost on command and it will be ten times better than the next guy.

MM: You have a new album out, TWD is an ongoing show that may never die…what’s next for the man known as Jason Virus?

JV: I started writing a three part movie script eleven years ago and need to sit my ass down and finish it. I have another music project in the works “SLAVETHING”, which just came out with its first album “Death Thing”. So we need to start working on the second album for that. We have a SUGAR VIRUS comic book coming out next year. The next SUGAR VIRUS album has been written. We also have a SUGAR VIRUS “covers” album coming out soon.