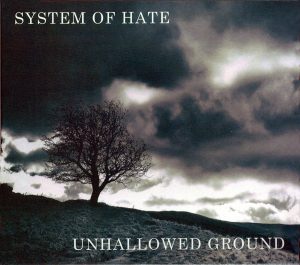 And lo did the Beast create System of Hate and say unto them “Thou shall carry forth the seed of thy progenitors and sow it far across the face of the world”, and they did rise from the clay and set forth to help usher in a new age of reason.  Or rather, in my imagination, and after listening to Unhallowed Ground on repeat all morning, that’s how I imagine System of Hate were brought into being; their fusion of early Killing Joke, Bauhaus, The Damned and Amebix, filled with astute political commentary and religious imagery rising from the darkness to drag us all, willingly and happily, back through time to the eighties. Back to their natural habitat, a time when alternative and indie bands – and music –stood for something, were exciting, thrived on danger and were more than just the sum of their parts. Simply tagging System of Hate as a punk band would do them disservice, as they dwell in that strange wasteland between the original  Goth movement and mid-eighties UK punk, existing solely in neither scene, but nevertheless, still part of both. And they sound fantastic… Tim Cundle