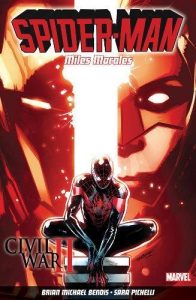 With Secret Empire speeding ever nearer and Monsters Unleashed pulling every hero into its gravitational field, the final, fading moments and stories of individual involvement in Civil War II are slowly, but surely beginning to emerge. Having been caught in the middle of two of Ulysses visions and being present when Tony Stark met his “end” at the hands of Carol Danvers, no-one was more involved, or caught up in the fallout from Civil War II than Miles Morales, the new(ish) and latest(ish)Spider-Man on the block.   And this book is the story of Miles’ participation in the life changing, world altering event that made him reconsider, and challenges everything he thought he knew about, being and assuming the role and identity of a superhero.

From his recruitment, and eventual agreement with the position adopted, by Tony Stark in the conflict, his presence at Banner’s assassination and the escalation in the conflict that occurs when it’s foretold that he’ll ultimately be responsible for the death of Captain America and his reaction to that “prophecy”, Civil War II is the story of a boy who became a hero and the hero who became a good man. While it’s bursting with all kinds of super-hero inspired action, it’s also an endearing, heart-breaking, life-affirming, at times upsetting and instantly relatable story of a teenager trying to find his way in the world while attempting to deal with his dual identity, his parents (and terrifying grandmother, which leads to a particularly moving, and funny, encounter with Luke Cage and Jessica Jones), his friends, school and all the other crazy stuff that walks hand in hand with being one of New York’s friendly neighbourhood Spider-Men.

I know I’ve said it before, and I know I’m going to say it again, but when it comes to dialogue heavy, emotive story-telling, Brian Michael Bendis wears the crown, sits on the throne and sets the standard against which all other four colour scribes are measured. Okay, so I’m biased because I’m  (more than a little bit of) a fanboy, but no-one else can write discourse and repartee like he can, no-one else has the same feel for its rhythm or the seemingly endless ability to write it in the same convincing, realistic and appealing way as he does. And when you team that kind of knockout punch writing with the mind scrambling, visually electrifying artwork of Nico Leon and Sara Pichelli and wrap it all up in a Spider-Man book, which this particular chapter in the mythology of Civil War II does,  then you’re about as close to comic book heaven as it gets. Fantastic… Tim Cundle