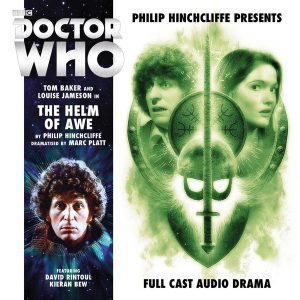 Strange things, according to the folks* who claim to know these things, happen up North and as far as the inhabitants of the Doctor’s second home** are concerned, it doesn’t get much further North than the Shetland Isles. So when the Tardis arrives on the previously thought deserted island of Bothness to find a thriving community seemingly oblivious to the bizarre time phenomena that surrounds their home, it’s a mystery that the Doctor and Leela, despite being made to feel less than welcome by the locals who are of the firm belief that Bothness is a local island for locals only, can’t help but become entangled in. Before long, they’re up to the Doctor’s long wavy scarf in oodd Viking ceremonies, rituals and celebrations in a place where the local Laird and his family have long been cursed by an ancient monster and where an unusual artefact seems to have woven some sort of spell over the aforementioned Laird. Inevitably though, where the Doctor treads, so do other other-worldly forces and as the natives become increasingly restless and seek to punish the outsiders, Leela and the Doctor discover that time isn’t as straight forward on Bothness as it is elsewhere, and that some family histories are far more frightening and complex than they have any right to be.

From the first opening heartbeat of the story, The Helm of Awe feels like a classic era Fourth Doctor adventure. Reminiscent in tone and pace to Terror of the Zygons and with the odd nod to The Wickerman (and not just because they’re all set in Scotland), Marc Platt and Philip Hinchcliffe’s story is gripping, full of vivid characterisation and explores, and incorporates into its plot, the history of all too often forgotten and neglected part of the world. Pairing legend and Science Fiction is never an easy task, even in Doctor Who where it’s an established part of the shows trope (I believe in some circles it’s referred to as the ‘History Gambit’ ***), but when it’s done well it’s always exciting and engaging, and when it’s done very well as it is in The Helm of Awe, it enslaves it’s audience, enticing them to stay until the end with it’s dark, delightful charms and its devilishly good cast, who’s collective performances transform it into a dramatic tour de force. It really is strange up North…  Tim Cundle

*The same people who claim lizards run the world, that Beyonce is the head of the Illuminati and who favour headwear made from tinfoil.

**You know, Britain. Blighty. The United Kingdom. The Earth place where he seems to spend an inordinate amount of time

***I might have made this bit up. But then, you already knew that didn’t you? Of course you did. And that’s why you’re reading this.