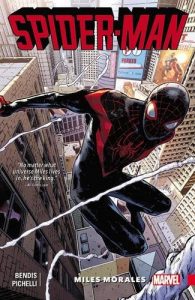 For a life-long Spidey devotee, it was never going to be easy to accept anyone else as Spider-Man regardless of the circumstances. But Miles Morales is such a likeable, charismatic character that it took me all of two issues to become a sure-fire, die-hard fan of the “other” Spider-Man and to completely accept him as part of the wall-crawling family. A lot has happened since Miles first started swinging through the city streets as a masked arachnid vigilante, and there’s far too much Morales history to even begin to cover in this review, but the beauty of Miles Morales is that you don’t really need to know any of it before diving headlong into the story and enjoying it for what it is. A good old fashioned Spidey adventure that’s full of razor sharp dialogue, compelling characterisation and a plot that veers between teenage drama and super-powered punch-ups without missing a beat.

It’s difficult being a teenager at the best of times, and it’s even harder when you’re trying to juggle a career as a super-hero with school. Something has got to give, and in Miles Morales, our hero finds his grades slipping as his alter-ego’s fame increases, which brings him into the sights of his Grandma whose determination to steer him back to the straight and narrow plays havoc with Miles’ life. And that’s after he’s faced, fought and defeated a demon who not only took down the Avengers but had an insatiable thirst for world conquest. It definitely isn’t easy being Miles or Spider-Man and if things weren’t crazy enough for him, he’s also got to deal with his friends, girls, aborted team-ups (thanks in no small part to Grandma) and more, not to mention the “secret” that his dad is desperately trying to keep hidden. Author Brian Michael Bendis does his usual immaculate job of balancing finely honed characters and a myriad of riveting plots, while his partner in crime Sara Pinchelli stitches the whole thing together with her incredible, stunning art. One thing’s for sure, Miles Morales is here to stay, so maybe it’s time you welcomed your new friendly Spider-Man to the neighbourhood. All together now, “Spider-Man, Spider-Man, does whatever a spider can…” Tim Cundle