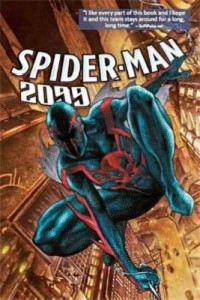 Spider-Man 2099: Out of Time – Peter David & William Sliney (Marvel / Panini)
Here’s the thing. I’ve been a massive Spider-Man fan since my dad took me to the cinema to see Nicholas Hammond’s turn as Spidey and Pete way back in 1977, and during the last thirty eight years while other heroes have come and gone and countless characters have faded into memory, my fascination with the wall-crawler, and the majority of his facets and alternate selves, has remained resolute. Well, almost resolute, see there’s one part of the arachnid powered hero’s mythology I’ve never been able to get behind, one of his many faces (hence the usage of majority rather than totality) whose appeal and enduring legacy has eluded me. I’ll give you three guesses who it is, but don’t think you’ll need three and I’m pretty sure that you’ll get it one. Yeah, that’s right, me and Miguel O’Hara, otherwise known as Spider-Man in the year 2099, have never seen eye to eye and just when I thought that we never would, Peter David went and did his thing and not only did he make Miguel interesting, he also made him likeable (I know, I know, plenty of you liked him just fine before, but I didn’t, so come on, give me a break, okay?) and a believable central character. Trust me; no-one is more amazed by this transformation than I am. So, how did it happen?

Maybe it’s the time thing, with Miguel being stranded in his past and our present, it grounds him in a familiar Spidey setting; and almost instantly the similarities between him and Peter Parker come rushing to the fore. Not that he’s a Parker clone, perish the thought, but he faces the same type of problems in terms of the relationships (the prospective love interest with the equally guarded and closed off superintendent of his apartment building and the antagonistic and deliciously dark “friendship” that’s slowly starting to develop with his boss) that he’s forming and his tightly wound personal and working life, in which everything is already beginning to stretch to breaking point just serve to illustrate that maybe every Spider-Man has to go through the same trials and tribulations. And, boy oh boy, is he put through the wringer in ‘Out of Time’, as he’s forced to prevent a killer agent from the future removing him from the timeline; fights to prevent a rogue dictatorship acquiring Spider Slayers to subdue its citizens; and has to do everything in his power to ensure that his own grandfather does the right thing. Well, it’s about as much as a Spider-Man can do, to do all of that and stay sane (which he just about manages to do) Right up until he’s pulled into ‘Spider-Verse’ and things start to go badly wrong for Miguel, but become infinitely appealing to us fan-boys and fan-girls.

‘Out of Time’ is a smart, speedy story that thanks to Will Sliney and Rick Leornardi’s gorgeous pencils, looks as good as Peter David’s tale reads. It’s engaging, absorbing and fun, and I finally get it. I finally understand why other arachnoholics hold Miguel in such high regard. And you know what? It feels pretty good… Tim Mass Movement