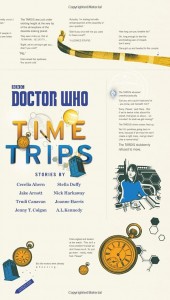 Doctor Who: Time Trips – Stories by Cecelia Ahern, Stella Duffy, Jake Arnott, Nick Harkaway, Trudi Canavan, Joanne Harris, Jenny T. Colgan & A.L. Kennedy (BBC Books)
Just when you think you’ve seen, and read, all the literary surprises that the Whoniverse has to offer, a book pops up almost out of nowhere, knocks you for six and makes you exclaim out loud, in front of your bemused family, ‘Well, that’s different’ and ‘Crikey (Please be aware, some words may have been substituted for family friendly versions) that’s just the ticket!’. Because ‘Time Trips’ is. Just the ticket that is.

Most (with a capital M) collected volumes of short stories that revolve around a common theme (in this case The Doctor) on offer vary in quality if not quantity. It’s only to be expected, as writing styles vary, some connecting and some jarring with the potential audience and unfortunate as it is, talent isn’t shared universally and evenly within writing circles and as such some authors are better than others. That’s just the way it is. Which brings me to the first unusual aspect of this collection, which is that each of the nine stories gifted to the Whoniverse by ‘Time Trips’ is on par with the others in the collection, there is no dip in quality, no stylistic nails scraping down a blackboard moments and each feels like it’s part of the canon and mythology of the Doctor it revolves around and involves. When you’re reading each of the stories, it’s that Doctor’s voice you hear in your head and it’s his Tardis and the all the peculiarities of his regeneration that you see. Whether it’s the Fourth Doctor battling monsters on a golf course with a galactic bounty hunter and a student, the Tenth Doctor becoming part of a fairly untraditional fairy story, The Third Doctor’s final hurrah before succumbing to the effects of the radiation that poisoned him on Metebelis 3 or the Sixth Doctor teaming with Doctor John Dee to defeat the Master, you’re automatically transported to their time period, to their time at the controls of the Tardis and completely submerged in each of the adventures contained in these pages. Which is, quite frankly, a remarkable achievement, one that each of the authors who have added a little of their personal magic to ‘Time Trips’ should be, justifiably, proud of.

And then there’s the other thing about ‘Time Trips’. It’s bigger on the inside than it is on the outside, and not in the figurative sense that most novels and books are, because stories and their imaginative and creative content are bigger than the vessels that contain them, but in the physical, real world sense that yes it really is bigger than it initially appears to be. Which, if I’m honest, when I found out, when the “puzzle” revealed itself, it made me grin from ear to ear and I felt exactly the same level of raw, nervous, adrenaline pumping excitement as I used to every single Saturday tea time when Tom Baker would invade my television screen. It sounds ridiculous I know, but trust me, if you’re a die-hard, long-time Whovian, I’m willing to bet a bag of jelly beans that, as soon as you discover it, you’ll feel exactly the same about it as I did. So what are you waiting for? It’s time to take a trip in the Tardis. A time trip… Tim Mass Movement