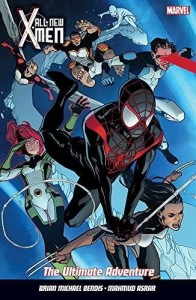 All New X-Men: The Ultimate Adventure – Brian Michael Bendis & Mahmud Asrar (Marvel / Panini)
I don’t know anybody who doesn’t love a good “fish out of water” story. Tales where the protagonists are taken, forcibly or by accident, from their own comfortable, familiar environments and are dumped into strange and alien places and left to try and function surrounded by the unexpected, exotic and unusual while struggling to find a way “home”. When Bendis did it to the X-Men, snatching the original team out of time and dumping them in the future which just happened to be our present, he made a true believer out of me, and transformed ‘All New X-Men’ into one of the must read, top of my pull list titles of the last half decade, and I just when I thought the book couldn’t get better, Bendis goes and pulls another rabbit out of the hat, sending the original chronal refugee mutants into a parallel world. That’s right boys and girls, the first X-Men from the all-is-fine-and-groovy-or-at-least-as-groovy-as-it-ever-is Marvel Universe are catapulted into the Ultimate Universe, and everything just got turned up to eleven, because as good as that sounds to you right now (and it does doesn’t it? It does sound good), believe me, the book is even better.

Left to their own devices, the X-Men (you know which ones I’m talking about) along with X-23 discover a new mutant, and set out to help her, as best they can. Unfortunately, the new mutant’s powers allow her to open gateways to other worlds, Universes and dimensions and in a moment of panic (and who wouldn’t panic if you suddenly discovered you could warp reality and were then confronted by a pack of teenage weirdos claiming they can help you) sends herself and the X-Men into the Ultimate Universe, scattering them around the new world in the process. Trapped, confused and alone, the X-Men all reach the same conclusion and race to find each other and the only person who get them home. However, nothing is ever that straight forward or easy in the four colour world, as poor old Beast finds out when he becomes a brainwashed prisoner of Victor Van Damme, that’s Doctor Doom to the uninitiated, and is forced to work on furthering the megalomaniacal ambitions of the crazed super-villain. All is not lost though, as with a little help from the Ultimate X-Men, Spider-Man and James Hudson, his comrades in arms show up to help him and all hell breaks loose in a gloriously over-the-top, action packed battle that quite literally blows the roof off (and the walls out) of the Latverian stronghold in which Beast is being held. And that’s before they attempt to make their way back to the world which has become their own, which is a story in itself and worth the price of admission alone. As I said, Bendis has upped the ante and may well have just shattered the previously mutant proof glass ceiling.

‘The Ultimate Adventure’ has it all. A lightning fast, involving plot, incredible character interaction – one of the many highlights of the book are the constantly shifting relationships that develop between the X-Men and their Ultimate Universe counterparts, razor sharp, witty dialogue, a multitude of super-powered smack-downs and shenanigans, eye popping, jaw dropping art and much, much more besides. This is exactly why I read comics. This book, this one right here, this is the reason. Absolutely fantastic… Tim Mass Movement