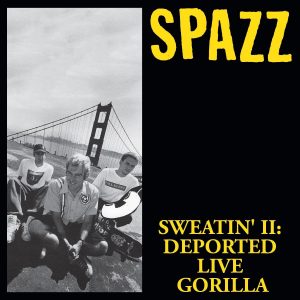 Just in time for old St Nick to drop into an oversized sock for a loved one and following on from their reissues of Sweatin’ to the Oldies and Sweatin’ 3: Skatin’, Satan & Katon comes the latest reissue from power violence legends Spazz. Originally released in 2001 under the title of Sweatin’ 2: Deported Live Dwarf, Sweatin’ II: Deported Live Gorilla showcases the band at their brutal best courtesy of the re-master treatment given to it by Dan Randall of Mammoth Sound.

Formed in the Bay Area in 1993 Spazz merged the best of punk/hardcore with the best of the grindcore and essentially created what became power violence.  Their influence was far reached and the trio of Chris Dodge, Dan Lactose and Max Ward would go onto write some of the fastest most brutal slabs of noise ever heard, all instantly recognizable as Spazz often mashed skate video/kung-fu movie samples into their humorously titled songs along with the occasional banjo riff (Shrimp on the Barbie) They released splits with their peers ranging from Hirax and Brutal Truth to 25 Ta Life until they eventually split in 2000. Sweatin’ II, focuses on the years 1995 and 1996 with tracks taken from splits with Subversion and Romantic Gorilla, plus a full live set from KFJC radio and for the first time ever, this Tankcrimes edition of Sweatin’ II gets the full digital treatment.

Along with Charles Bronson, Spazz were the epitome of the power violence scene and Sweatin’ II: Deported Live Gorilla is a vital part of its history. Although this is essentially a remastered edition, some of the tracks here are actually mastered for the first time and in my opinion Spazz have never sounded better. An absolute must have for fans of the genre and extreme music…… Chris Andrews