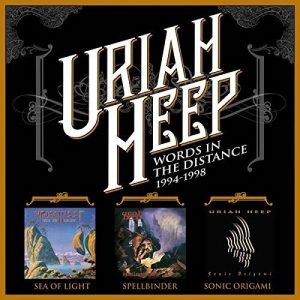 Words in the Distance compiles three mid-nineties classics from the progressive heavy metal legends, all re-mastered. Sea Of Light (Disc one) is their 1995 up-tempo (and probably stand out) release featuring four songs written by the now sadly departed Trevor Bolder. This English rock band rode the crest of the wave for years and it’s easy to see why. Vocalist Bernie Shaw delivers an amazing array of pure talent, power and passion, fusing great lyrics and melodies and keeping the spirit of rock/metal well and truly alive. Newer listeners may pass them arrogantly by (but to their own ignorance) but Heep deliver feeling. Heaviness, yes, but hooks and melodies that amplify the beauty of guitar driven music. This re-release also comes with two bonus tracks and a single edit of Dream On.

Uriah Heep have seen a recent resurgence in popularity over the last few years, managing to execute what have probably been their best albums with the last few releases. Hearing the older stuff sound so current even now, Sea Of Light is a great way to revisit some of the past – you may then learn something new!

Originally released in 1996, the live album Spellbinder (Disc two) captures the band in very strong form rocking out an eleven song set with a supporting and vociferous audience in Koln, Germany from a gig originally recorded for radio show airplay only in June 1994. Heep have surely created a timeless piece of rock/metal here, backing up Mick Box’s stunning guitar work and Bernie Shaw’s versatile vocal range. With a set list that includes brawny classics Stealin –  in which the crowd enthusiastically join forces with the band even though it’s just second song in, Rainbow Demon, Wizard, Gypsy, Lady In Black and the obligatory Easy Livin’, I defy any rocker to denounce it’s perfection!

1998’s Sonic Origami is the third disc in the set and creates an entirely different vibe.  With no brash lead breaks or twists and turns in tempo, it’s an album crammed full of feeling and a very mature rock approach. Sonic Origami brings together a hint of laid-back Deep Purple, elements of Queensryche and the technical specificity of Marillion it’s fifteen songs for a rocker’s more contemplative moments.

Words in the Distance is great way to find out, or re-discover one of the U.K.s longest running active bands in a time when they might have been overlooked. Boxed up nicely and accompanied with a bumper booklet of info (twenty pages) written by Metal Hammer long-term scribe Malcolm Dome makes up for tidy packaging.  Mark Freebase