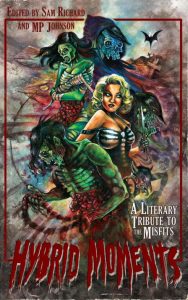 When I first saw the title of this book I was a bit leery. Will a literary tribute to a band be a bunch of essays written by people who were influenced by their music? Will it be a bunch of half-ass attempts to explain what the musicians were thinking when they wrote the songs? What the hell is a literary tribute?? In this case it’s a collection of short stories by various authors whose writing has been influenced by the aforementioned legendary horror punks.

Some of the authors chose to be more blatant with their references, She wanted their skulls. She needed their skulls. Others were subtler, leaving me to believe that I may have missed many of the clues even though I have been a Fiend for many years now. Sometimes I caught the references consciously and other times I only realized what song was being alluded to by which song started playing itself in my head. It would be awesome if Jerry Only and MP Johnson could collaborate on an official soundtrack to this book.

As you may have guessed, these were horror stories. Some of the tales hinted at the movie/idea behind whichever song was being referenced but others focused solely on the lyrical ideas as written by Glenn Danzig himself. There is gore, there is skullfucking imagery and there is poetic beauty…not always in the same story but more often than not there is a solid combination of the three. One of the tales in this tome is so bizarre that even I had difficulty following it but I loved the pictures it placed in my head. I don’t like to mention favorites in an anthology so I won’t start here. I will say that this literary tribute far exceeded my expectations and as a fan of The Misfits I would easily recommend this to any fan of the band, young or old, new to the band or a fan since their original inception. I thank MP Johnson, Sam Richard and all of the fans that contributed to the crowdfunding campaign for a delightfully horrifying book. Jim Dodge