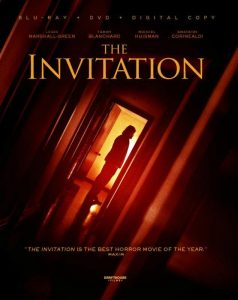 Will and his girlfriend Kira arrive at his ex-wife Eden’s dinner party, after having broken contact two years previous following the death of their child. What seems to be a fond reunion amongst old friends starts to take a dark turn when Will notices some things just aren’t adding up. Two new friends from Eden’s trip to Mexico join the party, but their presence only adds to the sinister undertones at play.

Director Karyn Kasuma has learnt a lot from her involvement in 2005’s pretty disastrous Aeon Flux. Vowing to ensure complete control of her projects from now on, The Invitation certainly has the feel of someone who has intimate knowledge of her craft, and left in peace to tell the story in the way she wants. With a single set, the low budget film is able to primarily concentrate on the storytelling while still showing off some style.

Seeing the story through Will’s viewpoint is perfect for those watching the events unfold – he’s a man of few words and has an eye for small details. He, like us, knows that something is up and wants to find answers. Sadly, those around him are happy to accept the evening for what it is, and refuse to let a series of bizarre but excusable set plays swing their views. Are they simply inebriated, or just happy that their friend is home? Is Will acting paranoid, or does he have good reason to not trust the circumstances of their visit?

The Invitation is purposely slow, and tense for those watching – a combination of dialogue heavy writing and a perfect soundtrack accompanying it. As viewers we know something must be wrong, but with only one character reacting to the strangeness our fear for the other characters becomes compounded. A feel of creeping dread follows Will as he wanders his old home, with flashbacks to his old life there that can only add to the distortion of what he is seeing. We’re made aware of events happening outside the reach of the camera, but not to a degree where we have enough information to make a full decision. We’re simply left with our gut feeling, just like the protagonist.

A lot of films veer off into the realm of craziness with their conclusions, but Karyn keeps the train on the tracks, and while the plot remains extreme it never feels like anything that happens is out of all expectations. In fact, my personal theory went a lot wilder as I attempted to draw parallels between the present and past, but it was to some relief that it keeps its head.

This is not a film I feel anything new can really be gleaned from multiple viewings. It’s a fairly straight ahead movie that doesn’t leave anything open to any real interpretation, which actually brings some relief based on modern trends in writing. Performances are generally strong, particularly the looming presence of John Carroll Lynch from his introduction early, and the ensemble being made up of competent actors who aren’t household names packs on the realism, certainly far more than the original casting of Luke Wilson and Topher Grace.

The Invitation definitely should be added to the list of modern suspense movies that are doing their own thing well, rather than emulating a well-trodden path. Drafthouse has added another interesting film to its ever increasing collection, and remains a label to keep watching. James Connors