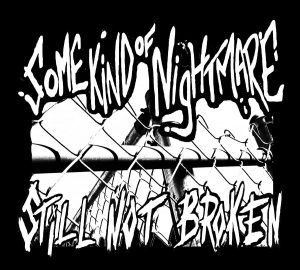 When a new local bar advertised a free punk show on a Friday night I knew I wanted to go. I hadn’t heard of the band but I needed some live music added to my life as it had been weeks since the last time I had made it out to a show. The local headliners couldn’t make it so Stephen Powell stepped up with his guitar and played a few songs for the crowd and then made way for San Diego punks Some Kind of Nightmare. I guessed they would be horror punk with a name like that but I was wrong, though not at all disappointed. They slammed through a set of blistering punk rock of the type that you rarely hear these days; raw, angry and guaranteed to make you spray an Anarchy logo on your car on your way home.

I bought a T-shirt and a CD from the band, their new album Still Not Broken. As it turns out bassist/vocalist Molly Mess spent a year battling, and conquering, breast cancer. This new album is their victory cry and it does a great job of capturing the energy and spirit of this band. Opening track ‘Back to San Diego’ is their way of saying that while they love touring, they always miss home when they’re on the road and album closer Toxic Tourniquet is Molly’s energetic way of telling the world that she went through Hell and has returned triumphant. “This is my body, undefeated!” These songs display a passion for music and do great justice to the way Molly and husband Chy Mess (guitar/vocals) mesh on and off the stage. If you like punk rock that harkens back to the early 80s, punk that’s sneering and revolutionary and that encourages the long haired kids to stand their tresses up into foot high Mohawks, then you need to listen to Some Kind of Nightmare. Jim Dodge