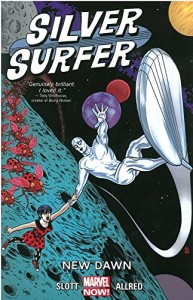 Silver Surfer: New Dawn – Dan Slott & Michael Allred (Marvel / Panini)
I’ll admit it, I don’t mind. I’m a mark for anything and everything that carries Dan Slott’s moniker, as a writer he’s up there in my top ten and he earned his position via his sterling runs on ‘The Mighty Avengers’ and ‘Avengers: Initiative’ and, of course, his ongoing and incredible work on ‘The Amazing (and ‘The Superior..’) Spider-Man’. So, when word eventually reached these here parts that he was handed the reigns for the new ‘Silver Surfer’ book, I damn near lost my mind. Dan Slott writing the Silver Surfer? Some things are just too damn good to be true, but fortunately this wasn’t one of them. Because not only was it true, but the book is pretty darn good too.

‘New Dawn’ finds the Surfer, as ever, not only trying to make amends for his previous life as the herald of Galactus, but strangely linked to a young woman named Dawn Greenwood, who once when she very young, made an incredibly unselfish wish on an extraordinary shooting star. Forced to fight the Never Queen to save a bizarre palace in space when Dawn, a woman he has never met, is kidnapped, the Surfer soon discovers that not everything is what it first seems and that not everyone is frightened by the mere mention of his name or his past servitude. Having faced the Never Queen, The Surfer and Dawn then find themselves at the mercy of Nightmare, trapped in a dream world battling to free themselves and their friends with the help of Dr. Strange and The Hulk, before setting off into the Universe to see all of things that have never been seen and all that lies beyond the known barriers of existence.

Part fairy-tale and part retro, golden age science fiction story (thanks in no small part to the vivid, almost psychedelic, sixties influenced artwork of Michael Allred); ‘New Dawn’ is the perfect Surfer vessel. The tale of a girl who never wanted to go anywhere and a being who has fed worlds to a god, and their blossoming relationship, that has an underlying innocence, yet at the same time a worldy, all knowing tone, allows the Surfer to assume the mantle that so many of us have wanted him to for so long, right at the forefront of the Marvel Universe in a book that’s a heartfelt ode to a bygone, and much missed, age of comics and hero’s. It’s like, groovy man… Tim Mass Movement