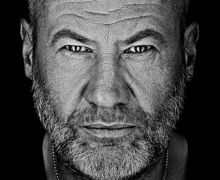 The enigmatic frontman puts on a full show. Not just music, a total performance, and the busy Northampton music venue lapped it all up with plentiful appreciation tonight.
Derrick Dick doesn’t rely on past glories alone, he is a charismatic performer who moves with the times, and quite frankly isn’t scared of aging.
With a set list packed full of only solo offerings right up to the studious endings, this is confirmed, and it’s only then that one of his Marillion hits is given air. Throughout the entirety of the stage show the audience is subject to cleverly pieced projections and though provoking images which tie in perfectly alongside the delicate aura of Fish’s melodic, well maintained voice. Surrounded by a set of very capable musicians, and sounding as good as ever the Scottish vocalist is capable of standing strong and captivating – as displayed during the entire evening; much to the crowd’s approval. In between song discussions and superbly structured stories make for very interesting listening, a piercing quietness intervenes as he divulges in connections with WWI and his very own grandfather, which brings in a very personal feel to the show. Fish is a man at peace with himself, and it seems his life path is now carved. His music is enjoyed by not only the fans, but by the man himself as a good sense of humour prevails from the onset. Fish’s songs have meaning, and they have attention to detail he is proud to discuss, but also displayed tonight is the fact that good old Mr Dick (as he often refers to himself as) loves a bit of audience banter, and is pleased to play along and answer the jovial remarks fired at himself. Fish is a people’s man, he talks the truth about what inspires him, and he’s quick to comment on his own eccentricity, he is not a man who hides the fact of feelings or his beloved spectacles – you’ll have to see the show to get the joke. Ending with two encores, and another Marillion song, then leaving the Roadmender to an adulated crowd it’s good to remember a man who fronted his ‘other band’ for four studio albums has now entered double figures for his own solo efforts. The Fish show is most definitely worth attending, it all sounds good. Mark Freebase