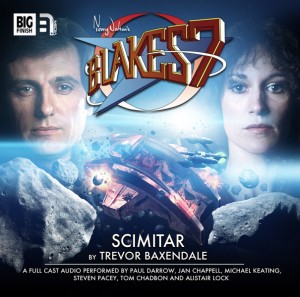 Blake’s 7: Scimitar – Starring Paul Darrow, Michael Keating, Steve Pacey, Jan Chappell, Tom Chadbon, Alistair Lock, Daniel Brennan & Buffy Davis & Written by Trevor Baxendale – CD / Download (Big Finish Productions)
Just like the proverbial bus, after waiting for what seems like an eternity (not that I’m prone to exaggeration you understand, but the eternity in question is actually more like a couple of months) for a new Blake’s 7 adventure, two arrive at once. Hot on the heels of the rather excellent tenth volume of ‘The Liberator Chronicles’, the opening chapter of the second series of ‘Blake’s 7’ arrives, and to be honest, after spending an evening or two in the company of Avon, Vila, Tarrant, Cally and Del Grant, I’m beginning to feel rather spoiled, as the quality control button has been twisted beyond maximum and then snapped off in an effort to prevent any dip in consistency and excellence. Which is nice.

Set during the third series of the original show, ‘Scimitar’ finds the crew desperately trying to find their missing colleague Dayna, and as the search begins, they stumble across the wreck of the Federation Cruiser, The Scimitar, long abandoned and lost in the asteroid strewn remains of a planetary system destroyed by war. While searching for any trace of Dayna aboard the ruins of the space hulk, Avon, Cally and Grant stumble across something that could decisively change the balance of power in their struggle against The Federation once and for all. With their enemies and other interested parties rapidly closing in on them and the Scimitar facing imminent destruction, they find themselves racing against in time in frantic effort to escape with their lives, as the treasure of the Scimitar beckons one and all to their doom.

Tightly paced, plotted and brilliantly enacted, ‘Scimitar’ is a fantastic start to the new series, delivering an adrenaline filled, excitement packed adventure that sets the crew of the Liberator on the path of the larger, ongoing arc that will no doubt, run throughout the second series. It’s business as usual for Avon and company, and business is good. The search for Dayna starts here… Tim Mass Movement