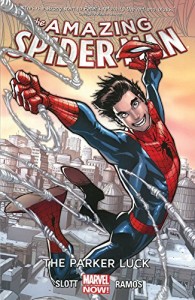 The Amazing Spider-Man: The Parker Luck – Dan Slott & Humberto Ramos (Marvel / Panini)
For a while there, I was starting to worry and thought that maybe, just maybe, no matter how unlikely it may have actually been, Pete wasn’t coming back and that Otto would spend the rest of his days as everyone’s favourite neighbourhood Spider-Man. Don’t get me wrong, I dug Otto as Spidey and his crazy super-villain trying to be hero gave the book a twisted, but fun nonetheless, edge as he desperately tried to fit into Pete’s world, but was destined to forever be the perennial square peg desperately trying to squeeze himself into a round hole. A leopard can’t change its spots, and a shark will always be a shark not matter how much it wants to be a dolphin, and Otto’s attempts to play at being the good guy were always doomed to end in disaster, and no matter how much he wanted, and pretended, to be Spider-Man, he could never really be the web-head. And you know why? Because there’s only one Spider-Man (sorry Miles), and that’s Peter Parker, and now, Pete’s back and in ‘The Parker Luck’, he sets out to try and make some sense of his life and repair all of the bridges that Doc Ock burned while he was in charge of Pete’s mind and body.

It’s a hard road that he’s been forced to walk and he’s got a lot to do, but Pete has always enjoyed a challenge and as he mends his fences with The Avengers and the super-hero community at large, he also tries to come to terms with the fact that he’s now the CEO of his own corporation (where the staff are terrified of him and his business partner loathes him), and thanks to Otto, is in a fairly serious relationship with Anna Maria Marconi, the woman who proves that good things really do come in small packages. Pete’s back, and the Parker luck is once again running the show, which means that while Pete’s running around like a headless chicken trying to regain control of his personal life, his “professional” one turns round and kicks him square in his pants while his back is turned. After getting their fingers burned by ‘The Superior Spider-Man’, both Electro and The Black Cat are out to settle the score and focus their attention squarely on the wall-crawler, who, thanks to the devastating secret bomb at the heart of the ‘Original Sin’ event, has just discovered that he’s not the only spider-powered hero in New York; a discovery that brings its own set of problems and opens a can of worms that even Pete can’t slam shut. Pete’s back and all is right, or slowly getting there at least, in Spidey’s world again.

‘The Parker Luck’ is a joy filled welcome home for the much missed Peter Parker, and with Dan Slott providing the words and Humberto Ramos delivering the pictures, it was never going to be less than spectacular (hey, wasn’t that one of Spidey’s previous titles?) and incredible. The characterisation, dialogue and plot are snappy, punchy and straight to the point, making sure that Pete’s dumped straight back into his old life with a whole new set of problems and oddly dysfunctional, but weirdly appealing relationships to deal with and blunder through. But you know what? I wouldn’t have it any other way. Ladies and gentlemen, boys and girls, I give you Peter Parker, the one and only, Amazing Spider-Man. Spidey’s back, he’s really back. Oh hell yeah!!!! Tim Mass Movement