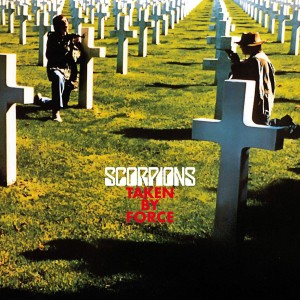 1977 saw the Scorpions release their fifth studio album, and back then opening track ‘Steamrock Fever’ would of sounded like a jack-hammer at full speed. Having never owned this album myself, but having knowledge of the songs from my ‘Tokyo Tapes’ double live album, I am somewhat surprised how I let this one slip through the net. Scorpions were pioneers in guitar driven rock and managed to hold transfixing rhythms bolstered with hugely powerful choruses yet without commercialisms (that was to come in latter years), which kept themselves at very much the for-front for the developing hard rock movement. Keeping some of the trippy fixations and psychedelic atmospherics from the earlier years and albums, ‘Taken By Force’ was also carving a weightier sound for the band – hard rock was presenting a stronger stature in the music. Fans of early metal and NWOBHM will certainly appreciate this albums tone, and being backed with bonus un-released demo tracks as part of the re-issue it should be appealing all round. Mark Freebase