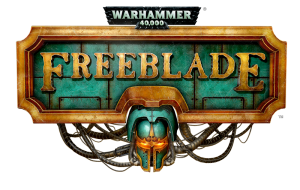 Command a colossal Imperial Knight in one of the deepest, richest and most explosive shooters on mobile.

Warhammer 40,000: Freeblade, an incredible new action combat experience set in Game Workshop’s famous 40k universe and the first game shown on the iPhone 6s during the Apple Special Event to debut 3D Touch gaming, launched today and is now available to download from the App Store, developer Pixel Toys announced. One of the first games truly optimised for iPhone 6s and iPhone 6s Plus, with 3D Touch control mechanics, the game is also available for iPhone 5 and 6, iPad 3 and above, iPod touch 6th gen and above and iPad Pro.

The launch of Warhammer 40,000: Freeblade marks the arrival of one of the most comprehensive and content-rich shooters available for mobile and tablet.

Warhammer 40,000: Freeblade delivers an exclusive in being the first Warhammer game to give players command of an Imperial Knight, a colossal armoured war mech, to engage in large-scale, close-up combat complete with dramatic environmental destruction. As an Imperial Knight, whose noble Drakkus house has been destroyed by the twisted forces of Chaos, players join forces with the Dark Angels Space Marine chapter, and embark on a journey of honour, redemption and vengeance on the world of Tarnis, laying waste to the enemies of the Imperium.

In control of this unstoppable war machine, players use cannons, missiles and thermal blasts to obliterate foes as environments crumble to dust around them. Equipped with a mighty Chainsword, players will feel the weight of the Freeblade Knight’s every swing as they execute Orks, mechanised horrors and gargantuan beasts with brutal strikes in epic battles.

Control of the Knight’s weaponry is intuitive and brings intense destruction as the immense 50-foot mech advances through Tarnis’ war-torn cities and landscape. Delivering visceral combat with precision targeting, players take aim and fire standard, heavy and special weaponry through use of single-tap, double-tap and multi-tap gestures.

On iPhone 6s and 6s Plus, an all-new control system makes instinctive use of 3D Touch technology: press into the screen to zoom weapon sights, the deeper the press the further the zoom, while a reduction in pressure zooms the sights back out, or holds it at a certain level; press down far enough and players will switch to a heavier weapon to go in for the kill – all without lifting a finger from the screen.

Perfect for Warhammer fans, Warhammer 40,000: Freeblade also offers a richly detailed customisationsystem – players can make use of Games Workshop replicated paints and adornments to personalise their Knight. An extensive crafting system enables players to forge and equip powerful weapons including the Avenger Gatling Cannon and the Melta Gun to purge Ork scum and Chaos heretics alike.

In addition to the Campaign at the heart of the game, players can also complete in daily challenges and compete against other players in specific missions to achieve high scores and win legendary weapons, armour and equipment for their Knight. The campaign missions themselves can also be tackled with 85different special objectives; beyond Campaign, players can tackle Storm, Slaughter, Protect, Assassination, and Destruction mission variants.

“From a team with a background in high-quality console based titles, Warhammer 40,000: Freebladeis the absolute embodiment of Pixel Toys’ ambition to create the most exciting, visually intensive, high impact action titles for touch screen devices,” commented Andy Wafer, co-founder of Pixel Toys.

“Freeblade raises the bar for action gaming on mobile – the team have produced a brilliantly intense shooter, set it in a visually stunning recreation of the Warhammer 40,000 universe, brought depth and variety through the forging and customisation systems and offered players a long-term experience through daily challenges and procedurally-generated missions – and we have plenty more to come.”

Warhammer 40,000: Freeblade’s development has been supported by GamesLab West Midlands, a programme of investment designed to aid and sustain the growth of the region’s burgeoning games’ industry, funded by the European Regional Development Fund, supported by the Government’s Regional Growth Fund, and led by Creative England.