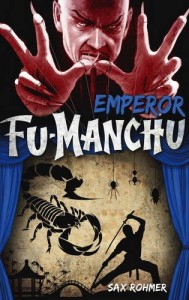 There was a time – and it wasn’t all that long ago from both a literary and a historical perspective – when heroes were square jawed, smoked pipes and drank copiously. They thwarted the nefarious schemes and diabolical plans of moustache twirling villains in fast paced, ridiculously over-the top, knuckle-whitening, nail-biting, high octane thrillers whose plots didn’t give a damn about social and moral conventions and niceties. The US led dominance of the “pulp hero” genre (as it eventually became known) was dominated by American big-hitters like The Shadow, Doc Savage and The Spider; and their creators, Norvell Page,  Lester Dent and Walter B. Gibson.  Meanwhile back in good old Blighty, there were a brace of authors who gave the genre their own twist; namely W.E. Johns with ‘Biggles’ and Arthur Henry Ward with Fu-Manchu. Ward, more commonly known by his pen name Sax Rohmer, adopted an unusual approach, as the villain in his stories – Dr. Fu-Manchu – took centre stage with the action revolving around Nayland Smith’s repeated efforts to foil whatever malicious designs Fu-Manchu had for England, China and the world.  It was, and is, one of the greatest cat and mouse games in literature; beginning in 1912 it lasted nearly half a century, ending with Rohmer’s death at the end of nineteen fifties. And this tale of devilish plans and the frantic quest to foil them , ‘Emperor Fu-Manchu’ was, Sax Rohmer’s final book and the end of that glorious, dramatic, action packed, odd relationship as Smith and Fu-Manchu’s dance of destruction reaches its climax.

The story is, as was most of Rohmer’s work, fairly straight forward, with a secret agent, Tony McKay being dispatched by Nayland Smith to discover whether or not a rising criminal mastermind in China is indeed, Dr Fu-Manchu. However, the apparent simplicity of the main plot soon gives way to all manner of intrigue and suspense involving reanimated corpses, biological warfare facilities, secret lists, espionage in its rawest and most brutal forms and with a little romance thrown in for good measure. ‘Emperor Fu-Manchu’ drags you willingly into its dizzying and unrelentingly exciting story. The twists and turns keep coming, the heroes lives are always in danger and Fu-Manchu is at his fiendish best, even if his (and by extension Ward’s) obsession with defeating communism does become a little overwhelming at times. At times, I’ll admit ‘Emperor Fu-Manchu’ made me feel a little uncomfortable, as the attitudes of the era in which it was written toward race and gender are glaringly apparent, but that said, both are far less troublesome than they are in the work of some of Rohmer’s contemporaries, and the he pulse-pounding pace of the thrilling story served to annihilate most of my apprehension and misgivings, as both faded into an inscrutable desire to know what was going to happen next.  ‘Emperor Fu-Manchu’ is action packed story telling at its finest, and it’s true what they say. They really don’t make them like they used to, and the world is a much bleaker place because of that. Still at least you can get a taste of how good things used to be. So, what are you waiting for? Fu-Manchu is expecting you… Tim Mass Movement