Warning: preg_match() expects parameter 2 to be string, object given in /var/www/vip4/sites/vip6102689/httpd/htdocs/wp-includes/formatting.php on line 4866
 Salad Days - The Movie - Mass Movement
x
Spread the love 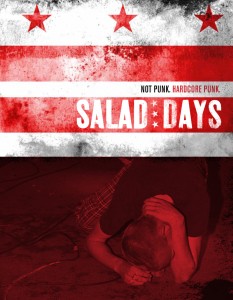 Salad Days – The Movie (New Rose Films / MVDvisual)
Outstanding music documentary chronicling the formative and influential Washington DC Punk/Hardcore scene between 1980 and 1990. Salad Days features interviews with the most obvious players in the DC scene (Ian MacKaye, Henry Rollins, Cynthia Connolly, Jeff Nelson, Kenny Inouye, John Stabb, Brian Baker, Sab Grey and the ubiquitous Dave Grohl) as well as other musicians tied to, or directly influenced by, the DC scene (Tim Kerr, J Mascis and Thurston Moore amongst others). All give candid, and at times painfully honest interviews, in which the dynamic that drove the DC scene is examined, and the often fraught relationships (particularly in the Minor Threat camp) are laid bare. Interspersed with some phenomenal live footage of Bad Brains, Government Issue, Void, Faith, SOA, Marginal Man, Dag Nasty and Fugazi, Salad Days is a mature and in depth analysis of one of the crucial US Hardcore scenes, the individuals that developed it, the political activism and DIY ethic that permeates the scene to this day, and how this lead to the birth of emo, and the alternative music scene of the late 90s. Essential viewing. Ian Pickens

Salad Days – The Movie (New Rose Films / MVDvisual)
American hardcore is something like 35 years old, and it seems that more and more documentaries are being put together to capture the essence of this scene. What was a movement born out of teenage angst, inner city turmoil, escapism and suburban blight has long come of age, and now is as good a time as any to look back to see what was then, and what is now.
The Salad Days movie puts the DC scene 1980-1990 under the spotlight. From the rudimentary beginnings that saw disparate teens armed with guitars and microphones as weapons to vent their anger, pass through the maturity phase of exploring further feelings and emotions beyond blind rage, right through to the tip of the grunge explosion and national interest in this little scene.
The format is a tried and tested one of interview snippets interspersed with vintage footage of the bands of the period, following the evolution of the scene in chronological order.
The early footage is grainy and rough as hell and sums up the era perfectly, with some rare footage of the likes of Teen Idles or SOA as well as some more familiar footage of the Bad Brains. The interviews are insightful without being too controversial. Fans will have seen the likes of Ian MacKaye or Henry Rollins on screen a thousand times, but this film gives airtime to band members from Marginal Man, Fire Party, Black Market Baby, King Face, Gray Matter and tons of others that you don’t get to hear from so often, which I found really interesting.
There are great anecdotes throughout, whether it’s Ian MacKaye joking about the prank calls he still receives, Brian Baker’s take on “emo”, or Sab Grey from Iron Cross talking about getting beaten up by jocks.
I’m a big fan of the “second wave” of DC hardcore, the Revolution Summer era and there is plenty of material from bands like Beefeater, Soul Side, Rites of Spring and Scream on here which is worth its weight in gold. Bands and activists from this era took a stance against the increasing violence and male domination of the first wave of hardcore bands, behaviour which took a hold as the scene grew bigger and expanded way beyond the network of friends that had kickstarted the whole thing.
The interviewees are not afraid of being self-critical and you have bands explaining how they felt they didn’t fit in here or there – Black Market Baby and the whole straight edge thing, or King Face and the political Positive Force movement. The fact that bands with differing outlooks (ironiocally not the two I’ve just mentioned) released record on Dischord records or its subsidiary labels is testament to the fact that for the large part the scene was able to overlook differences and factions.
The last chapter of the film takes a look at the era of Fugazi and Nirvana and how between them they ignited massive interest in what was happening in DC. Bands like Jawbox got snapped up by the majors and Holy Rollers explained how they could easily tour based on the fact that they were from DC and signed to Dischord.
Unlike most of the other punk/ hardcore documentaries, this does not set a line in the sand and claim that after the film ends, everyone grew up and the scene died. You can see that most interviewees still have a passion for what they made and many of whom are still creating, and that made this film way more enjoyable for me that say “American Hardcore” and it’s attempt to write a history book instead of a chronicle of something still alive and vibrant today. I’m already excited for the DVD release of this one. Tom Chapman