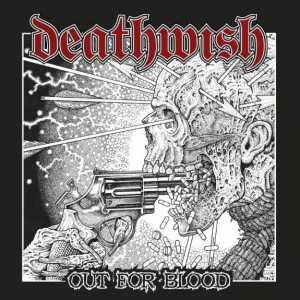 Deathwish – Out For Blood LP/ CD (Beer City)
Right from the first play, my ears were blown by this beast of an album. With an intro that would sound equally at home on a record by Turbonegro or Disfear, this swaggering riff slides into a d-beat extravaganza, backed by a top quality production and venomous vocals. What a way to announce your new album. There is no let-up throughout the album, as one beast of a tune chases the next, keeping up the tempo and intensity. It’s not strictly d-beat, you can hear the influences of the likes of English Dogs and Motorhead, but this does so without veering too far into the metal camp. Clocking in at the 25 minute mark, this is just the right length for sustaining the level of intensity that Deathwish have to offer. I have to say at first I was hoping this was a comeback album from the old UK thrashers of the same name as both bands’ artwork offerings are similarly bleak, but this debut album from Wisconsin’s Deathwish is certainly no disappointment. I gotta get the vinyl on this one! Tom Chapman