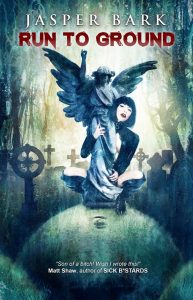 I’m not sure if it should be categorized as ego or genius but Jasper Bark is in the process of creating his own mythos. Full of horrendous monsters and gory death scenes, his work would make the masters shudder and now he’s going to reveal a common thread. So far only a few of his works have been considered a part of his mythos but it will be interesting (and disturbing) to find out just how he ties things together. Run to Ground is about a cemetery worker with a dark past and, though he doesn’t know it yet, a darker future. After running out on not one but two pregnant girlfriends, years apart, Jimmy hides as the caretaker of a graveyard in his hometown. He thinks he’s safe. He thinks nobody recognizes him. Unfortunately for Jimmy, the taint in his conscience calls to the hidden forces of evil. Now he’s getting what he thinks he wants most; a return to the womb. Truly his rebirth will be horrifying.

The death scenes in this book are tastelessly gory and perfectly wrought. You’ll love the shudders Jasper Bark gives you as you read the carnage. You’ll writhe in disgust as Jimmy gets what’s coming to him. I love the twists in this tale. I also love what happens in the end though I think the way it’s written takes some of the gut punch out of the final twist. Jasper usually hits us with an ending that impacts us like a speeding train but this one is more like a low speed bump with an airbag. I was left smiling with the turn of events but not gob-smacked like I expected. It’s a great story, but the ending is a little soft. Jim Dodge