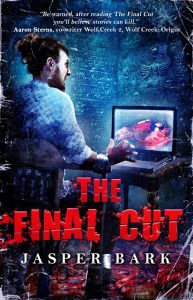 What would happen if Clive Barker was inspired to write a book after watching John Carpenter’s Cigarette Burns? Well, I think Jasper Bark has nailed the answer to that question with The Final Cut. When two indie horror filmmakers stumble across the mob and are forced to watch what appears to be a snuff film, close their eyes, open them to discover the mutilated remains of the Mafioso and then decide to use the footage to make a fictional film…well, they step in some really deep shit and end up discovering that fact is much scarier than fiction. 6,000 years of torture, a story that never ends and a tale that would bring a smile to the Hell Priest’s nail-studded face is what Crystal Lake has for us and it’s a fucked up thrill ride that will leave you disgusted and delighted in equal parts. You can expect buckets of blood, an embarrassing erection and twists that will leave Robert Bloch breathless. Jasper Bark is a talented writer and The Final Cut is another jewel in his crown. Jim Dodge