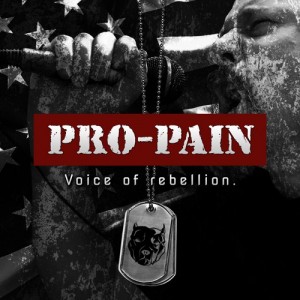 Pro-Pain – Voice Of Rebellion CD (Steamhammer)
With Pro-Pain you know exactly what you are going to get… quality pounding metal with hardcore aggression. Fifteen (studio) albums in, and showing no signs of turning down the shear force of the band, Gary Meskil and crew have created an album that re-ignites the spark of debut ‘Foul Taste Of Freedom’. ‘Voice Of Rebellion’ sees the quartet comfortably firing on all cylinders, banging out fourteen tunes and the opening vocal cry of “Die fuckers!” sums up the atmosphere here perfectly. ‘Take It To The Grave’ is a hard slab of brutality and rattles out giving any NYHC band a run for their money. Having said that, Pro-Pain have never bothered with being lumped into genres, but arising from the ashes of Crumbsuckers will always create opinions. ‘Fuck This Life’ shows Meskil air his displeasure towards millennium lifestyle and ‘DNR’ crashes through the speakers with some thrash crazed riffing. A digi-pak with three bonus tracks is also available (two lives tracks and a 2015 version of ‘Johnny Black’) so diehards will be tempted even more. With this album Pro-Pain have enhanced their trademark sound and should surely become front-runners for another stint. Mark Freebase

Pro­Pain – Voice Of Rebellion (SPV / Steamhammer)
Shows you how strange all labels are. No-one in their right mind would call Pro­Pain an industrial band, but the band’s 15th album is all about loud repetitive pounding riffs that deal blow after blow. The lyrics as well as the band’s attitude emphasize the well-­oiled blue collar touring machine’s ethos. You don’t have to expect any major surprise or shifts in style on ‘Voice Of Rebellion’. I do like Gary Meskil’s vocals as they have been made huge in the mix, and the band as a whole seems to work better together than on ‘Straight To The Dome’, which make the groove come out better. Not a big fan of the solos though, as they seem to be floating above the massive sound the band produces. All in all a complete metal(core) record on the back of which you can start a mosh pit with all your buddies. Martijn Welzen