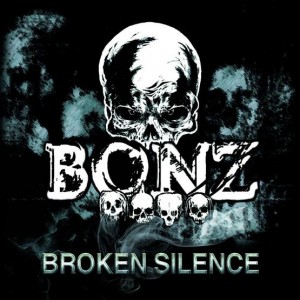 Bonz – Broken Silence CD (Eternal Sound Records)
It most certainly is a blast from the past, as it’s been a while since the rap/metal frontman has addressed the mike… what seems like a heck of a while since ‘Snappin’ Necks’ was being praised by everyone – with his former band Stuck Mojo making big waves in the mid 90s. Well for those who were greatly impressed with the documented past of one of the originators of this genre, they will be pleased to know nothing much has changed here. Bonz is still capable of busting out a gnarly rhyme and there is plenty of cutting guitar riffs to back it all up. It’s tight, it’s full of groove, it’s exactly what you would expect. Different tempos keep it all fresh in the mix, and a balanced production stops the whole product being biased in a certain direction. Ten songs and just under forty minutes of music that will send many (like myself) into a frenzied spiral of nostalgia. Will the revival of rap-rock/metal be the next big thing? Mark Freebase