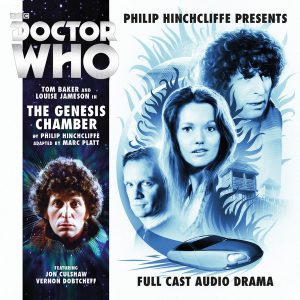 Forty years ago Philip Hinchcliffe was the producer of Doctor Who, looking after Tom Baker‘s first three seasons as the Fourth Doctor. This period is often cited by us Old School fans as the “Gothic era” of DW, containing as it did classic adventures such as Genesis of the Daleks, Pyramids of Mars and The Deadly Assassin (though in my view, Mary Whitehouse should have complained less about the violence of that particular story, and more about the title as being one of the worst pieces of tautology to damage English language. Though ‘Microsoft Works’ is a close second).

In The Genesis Chamber we are presented with a six-part adventure written by Hinchcliffe and adapted by Marc Platt. And yes, I’ll answer your first question straight away: if you are expecting a return to that Hinchcliffian Gothicism I mentioned earlier (and try saying that with a mouthful of sandwich and you may find yourself in need of the Heimlich Manoeuvre), then you will NOT be disappointed.

This is a rather epic and rather dark tale that takes place sometime in the future on a world that has been colonised by humans. In time-honoured tradition a caste system is soon implemented.  Rich city dwellers (with their well-honed BBC English accents) rely on advanced technology to create their children while shunning the primitives who live outside of their city (and you can tell who these are as they have – gasp – REGIONAL ACCENTS). While each side does its best to avoid the other, they are thrown together by a third force. One that neither side knows about, and one that threatens their very existence. With the Doctor and Leela forced to take two very different paths through this new civilisation, can they still work together to end this very real threat? And can the listener tell just who is Jon Culshaw and who is Tom Baker?

This is a pretty flippant review for what is actually quite a serious drama. There’s no Tom-foolery from Mr Baker here, but a totally, PROPERLY gripping story is still to be had. Enjoy with the lights off and the doors locked.  Bex Ferriday