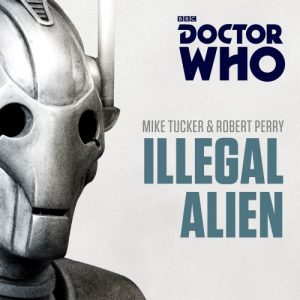 Way back when in the late eighties, this story was originally intended to make up part of what would’ve been Sylvester McCoy’s fourth season as the Doctor. But sadly it wasn’t to be as the ‘classic’ series was cancelled just after the Seventh Doctor’s third season. Illegal Alien finally saw the light of day nearly ten years later as part of the BBC Doctor Who original story book range in 1997 and was it worth the wait? In short, YES! And now the tale has been re-released as an audio book, brilliantly narrated by Sophie Aldred. This new format gives people who’ve read the book a chance to relive this fantastic story and also offers younger fans, who may not have read the book, the thrill of experiencing this high octane wartime adventure.

Set in London during the Blitz, a sinister serial killer known as the Limehouse Lurker stalks the war torn streets of Britain’s capitol and when American ex pat and private eye Cody McBride witness’s a strange silver sphere crash land, he finds that the only two people who believe him are an odd little man and a young girl who calls herself Ace. Much of the story is told from McBride’s point of view, giving it a very noir feel in places which is a nice compliment to the oppressive feeling of war time London, and McBride’s rocky relationship with Chief Inspector Mullen is a particular highlight of the story.

This is a great story that shows the silver scoundrels, the Cybermen, at their terrible best, although they face some stuff competition in the villainy stakes from  elderly gent George Limb, who is without doubt one of the most devious humans The Doctor has ever come across. From Cybermen to Nazi’s, American private eye’s to brash British police officers, an ancient Timelord to a wily senior citizen this is a fast paced, gritty and enjoyably story set in one of the most turbulent periods of Earth’s history. It is worth noting that the main cast in this book return for a sequel called Loving the Alien which I read from cover to cover in one sitting while waiting for a delayed flight in Manchester airport some years ago, so maybe, fingers crossed, we’ll also get an audiobook release of Loving the Alien.

Personally I hope it happens, as Illegal Alien will leave you hungry for more from these wonderful characters. Highly entertaining war time drama with a twist! Nath Rixon