Warning: preg_match() expects parameter 2 to be string, object given in /var/www/vip4/sites/vip6102689/httpd/htdocs/wp-includes/formatting.php on line 4866
 Pathfinder Legends: Rise of the Runelords: Sins of the Saviors - Mass Movement
x
Spread the love 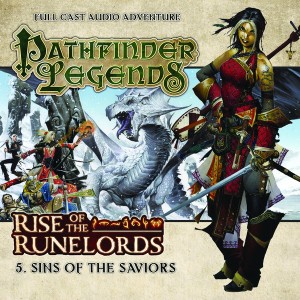 Pathfinder Legends: Rise of the Runelords: Sins of the Saviors – Starring Stewart Alexander, Kerry Skinner, Ian Brooker, Trevor Littledale, Yuriri Naka, John Banks, Toby Longworth, Nicholas Rowe, Annette Badland, Mark Donovan & Harry Myers & Written by Mark Wright – CD / Download (Big Finish Productions)
I remember the first game of ‘Dungeons & Dragons’ that I ever played. It was January 1983, and our party was sent to raid the tomb of a long dead king to plunder the wealth of ages long past and retrieve a crown that would grant its wearer a kingdom. Three decades later, and while the world has evolved almost beyond recognition and the pace of everyday life becomes faster with each and every year that passes, I’m still a gamer. I’m still an RPG devotee, I still play regularly and speaking from that perspective, as a gamer, sometimes all you really want is a good old fashioned dungeon delve, an adventure that tests your intellect as well as your prowess with a sword (well, a D20), that throws monsters, puzzles, magical weapons and all manner of excitement your way, and ‘Sins of the Saviors’ is the much anticipated and more than welcome ‘Dungeon Delve’ of the Pathfinder series, pitting our courageous adventurers against the magics of the ages as their search for Karzoug and a way to defeat him sends them into the dreaded Runeforge.

Returning to Sandpoint after a summons from their friend and inn-keeper Ameiko, our heroes find a sinkhole has opened up in the town, a sinkhole from which strange and terrifying noises are emanating. Venturing in, after a previous expedition failed to return, our adventurers are propelled on a course that sets them against servants of ancient evil, dragons and golems and reveals the truth about the Runelords’ and Karzoug’s plans for the world, before discovering the secrets of the Runeforge and preparing, and being prepared for, for the final, decisive battle with Karzoug in the halls of Xin-Shalast.

‘Sins of the Saviors’ the penultimate chapter of the ‘Rise of the Runelords’, is crammed to the rafters with every fantasy staple. Monsters, magic, adventure, a little deceit and enough adrenaline filled thrills to keep even the most cynical genre fan happy and make them feel like the world is shiny and new again. Well-paced, wonderfully plotted and with a cast who make sure that the characters leap fully formed from the speakers, ‘Sins of the Saviors’ once again ups the ante and adds another feather to the series cap. Just when you thought things couldn’t get any exciting, they do. And then some. Welcome to the days of high adventure… Tim Mass Movement