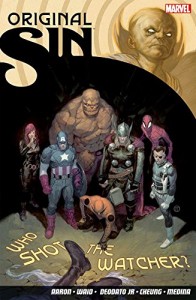 Original Sin – Jason Aaron, Mark Waid, Paco Medina, Jim Cheung & Mike Deodato Jnr. (Marvel / Panini)
Just as there are in life, there are certain constants in the Marvel Universe that are immovable, unchangeable and irrefutable. The Avengers, S.H.I.E.L.D, Hydra, Uatu the Watcher, these are the things around which everything else revolves and evolves. Everything else may change, but these cornerstones remain firm. They stand resolute, the wall that holds back (or in Hydra’s case open the door for) the ravaging hordes of chaos that continually scream and bay for the blood of innocents and the senseless deaths of millions. So when that dynamic is broken, when part of that wall collapses, all hell is let loose, anything goes and anything can, and often does, happen. It’s these moments that fans crave, precisely because anything can happen, because they bring with them a sense of raw, unfettered excitement and expectation, and the latest of these foundation shattering events, the murder of Uatu (The Watcher for those of you who arrived at the party a little late) and its aftermath unfolds in Jason Aaron’s latest epic crossover, ‘Original Sin’. And folks, this one, it’s a hum-dinging doozy of the highest order, because it throws everything in the air, scatters everyone to the wind and tears the fabric of the Marvel Universe and the lives of all of its major players to pieces.

Ostensibly, at its core it’s a murder mystery with every hero (and lots of not quite so heroic types as well) scrambling around at the behest of an ‘unseen’ presence in order to discover, and bring to justice the perpetrator. It’s a universe spanning manhunt that pairs the most unlikely of partners (The Punisher and Doctor Strange?) together in an attempt to bring swift and definitive resolution to the matter, which it does. But it isn’t that straight forward, and as the guilty are brought to light, all of Uatu’s secrets are revealed, all of the hidden truths buried and forgotten by every hero emerge, including a revelation about another long standing, trusted cornerstone that could, and does, change everything that not only the hero’s thought they knew, but everything that the readers, each and every single one of us, thought we knew as well. I wish I could say more, I wish I could go into glorious, intricate detail and tell you everything, but I can’t, I really can’t and believe me, it’s nothing to do with spoilers. I mean, come on, the internet is full of them, so why would I be bothered about a few spoilers popping up here and there? No, this is about the experience, because trust me, the less you know going into this story, the more you’re going to enjoy it as its multi-tentacled plots and sub-plots worm their way into your subconscious, as secret after secret spills out and The Unseen slowly, but surely emerges from the darkness; the already frantic, breakneck pace of Aaron’s gorgeously realised (thanks to the magnificent Cheung, Deodato Jnr and Medina) story picks up and hurtling ‘Original Sin’ toward its breath taking conclusion.

But that’s not all folks, as ‘Original Sins’ (the five issue mini-series) is also included in this tome, for your continued reading pleasure, the mini-series starring The Young Avengers and The Hood, Doctor Doom, Deathlok and more that looks at the street level impact of the revelations of ‘Original Sin’ while also taking a slightly more irreverent approach to, and good natured swipe at, the square jawed, serious tone that infuses each and every panel and page of it’s bigger brother. ‘Original Sin’ is about responsibility, truth, the price of secrecy, the lies we tell ourselves, the real price of freedom and the lengths that some will go to in order to make sure that the masses never have to find the “riches” needed to cover that debt. It is, quite simply, the stuff that legends are made of… Tim Mass Movement