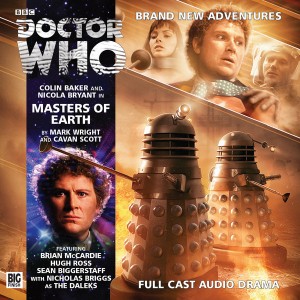 Doctor Who: Masters of Earth – Starring Colin Baker, Nicola Bryant, Brian McCardie, Tracy Wiles, Sean Biggerstaff, Hugh Ross, Damien Lynch & Nicholas Briggs & Written by Mark Wright & Cavan Scott – 2xCD / Download (Big Finish Productions)
Things used to be simple for The Doctor. He’d turn up somewhere, discover all sorts of illicit goings on, foil the plans of whoever was pulling the strings and leave triumphant, safe in the knowledge that thanks to him having been there, everything was now far better than it was before he’d arrived. But then, everything started to get a little more complicated, he began crossing his own time-stream, and the older he got and the more he travelled, the more he began to realise the importance of the web of time and how one misjudged, however well meaning, interruption in the flow of established events could destabilise, corrupt and forever alter recognized history. Which is why, for the most part, he avoids anything and everything to do with his own time stream as best he can, so that he doesn’t end up becoming the wrench that gets accidentally caught in the gears and cogs of time.

Sometimes, though, even the best laid plans of mice and time-lords go astray, which they do in ‘Masters of Earth’ when the Doctor and Peri arrive in Scotland in 2163, on an Earth controlled by the Daleks, a year before The Doctor, Susan, Barbara and Ian help defeat the invaders and free the planet. Which creates quite the conundrum for The Doctor, as he can’t interfere without risking the future; nor can he stand idly by and watch his mortal enemies wreak havoc, and when Peri, thanks to an act of kindness, is taken prisoner by The Daleks, things suddenly become a lot more complicated. Forced to act, The Doctor and Peri are plunged into a nightmare in which they’re compelled to flee to the Orkneys along with the resistance, falling foul of Vargas, Slithers, Robomen and The Daleks themselves, before finally reaching their destination where they unearth something far more terrifying than they ever thought possible; and the truth about what The Daleks are doing unhindered in the furthest wilds of the Highlands is revealed. A truth that finally forces the Doctors hand and ensures that he fights back against the Daleks regardless of the cost to the web of time and history.

‘Masters of Earth’ immerses the Sixth Doctor in the “world” of the First Doctor, allowing the story to expand upon its predecessor (‘The Dalek Invasion of Earth’), and explore more of the Dalek controlled territory which in turn takes it in a very different direction to the serial that it takes its inspiration from. The tone, pace and plot create a distinct feel for the drama, adding a sense of nostalgia, that when combined with the sound effects and Robomen and Dalek performances almost make you believe that ‘Masters…’ is a tale from the Hartnell era rather than the (Colin) Baker one. And talking of Mr. Baker, he is as ever, in excellent form, as is Nicola Bryant, who’s changing dynamic and relationship with her former, and new, travelling companion, provides the emotional heart of the story as they try to figure out what each means to the other and how the time they’ve spent apart has changed their friendship and how they see, and feel, about each other. Wright and Scott’s sharp, enjoyable and inventive story questions ideas about the nature of revenge and the effect that domination has on the psyche of the oppressed; and how the subjugated can often become subjugators once their chains have been removed. Featuring an exceptional supporting cast, ‘Masters of Earth’ is an incredible ode to an era of Who that’s often overlooked and neglected, yet at the same retains the dynamic energy, excitement and joy that’s become synonymous with the Sixth Doctor’s audio adventures. Riveting and thoroughly recommended… Tim Mass Movement