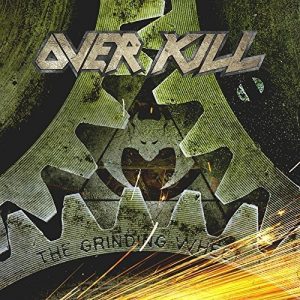 There are few things in life that you can truly depend upon; and if you believe Benjamin Franklin there are only two: death and taxes. However Ben was wrong because you can also depend on the duplicity of the political classes, the incessant greed of the rich, the fact that women are always right and that Overkill have never released a bad record.  And The Grinding Wheel, Overkill’s eighteenth album absolutely, and resolutely, maintains their recorded legacy and hits like ten tons of steel reinforced concrete from the get go. From the opening seconds of Mean Green Killing Machine through to the final fading moments of The Grinding Wheel, it’s a nerve shredding, neck snapping precision riff-a-rama of a record powered by the pulse pounding rhythm section of Verni and Lipnicki and Blitz’s trademark snarl, that howls at the heavens in a crescendo of heavy as hell, sing-a-long anthems. Fusing power metal and thrash as only Overkill can, The Grinding Wheel doesn’t let up for even a nano-second of its duration, obliterating the ear drums of anyone in listening distance with its ferocious and devastating metal attack. Is it their finest moment? No, that honour still belongs to both Ironbound and  White Devil Armoury, but The Grinding Wheel is almost certainly in the Overkill top five, which means it’s better than 99.9999 percent of the other metal records that you’ll hear this, or in any other, year. Raise your horns high, its Overkill time… Tim Cundle