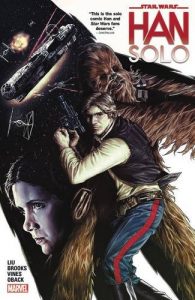 If you ask anyone who saw Star Wars on its original theatrical run (and, frankly, anyone who’s seen it since then) who, out of all of the characters onscreen they’d most like to be, Han Solo, the apparently amoral smuggler more interested in riches than causes, would almost certainly take the number one spot in the, admittedly a little strange, snap poll. The effortlessly cool, arrogant, swaggering, amalgam of James Dean, Steve McQueen and Captain Vallo (the role Burt Lancaster played in The Crimson Pirate) stole the show out from underneath it’s intended hero Luke Skywalker, helped in no small part by the fact that he flew the Kessel Run in less than twelve parsecs at the helm of the Millennium Falcon, and immediately entered the populist, mainstream zeitgeist. Almost overnight everyone knew who he was. He was the anti-hero that every little boy wanted to be when they grew up and the character responsible for breaking a hundred thousand hearts the world over as Harrison Ford, the actor who brought him to life, became a figure of lust for generations of female and male admirers.  So Marjorie Liu, like Atlas before her, must have felt the collective weight of expectation that was heaped on her shoulders by fandom when she took the reins of Star Wars: Han Solo. After all it’s the kind of gig that every writer dreams about getting, but get it wrong and it’s also the kind of unforgiving job that could leave you out in the cold, shut out by the united, collective forces of the four colour and Star Wars universes for the rest of time.

Thankfully, for both her future career and fans everywhere, Marjorie Liu has knocked it out of the park with Han Solo, hitting the sort of home run that allows her to slide into home in less time than the Falcon took to achieve its breaking claim to fame.  In a story that fuses the war time espionage and intrigue that Alistair MacLean became famous for with an innate understanding, and love, of Star Wars, Han and Chewie enter the most dangerous race, the Dragon Void, in the galaxy under the pretext of undertaking a secret mission to rescue the remnants of the Rebellion’s intelligence network which is slowly being extinguished, one spy at a time, in grisly fashion by an unknown protagonist in the service of the Empire. Surrounded on all sides by potential traitors, moles and enemy agents, Han and his partner in crime, become drawn in by the spirit of the racers, the tournament that he’s always imagined winning, everything that it represents and endeavours to claim victory while also fulfilling his obligation to Leia and the Rebellion.  Combining the almost noirish, Marlow-esque feel of Solo’s narration with meticulous characterisation, polished dialogue and the mind-melting, eye popping art of Mark Brooks, Liu’s Han Solo is a compelling, fast flowing tale of treachery, double dealing, honour and the constant danger that Han and Chewie face thanks to their chosen profession.  And Marjorie Liu, over the course of the five issue series that’s collected in Han Solo, has managed to capture every facet, twitch, tick and personality trait that makes Han Solo, well, Han Solo.  Punch it… Tim Cundle