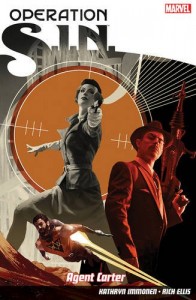 Operation S.I.N.: Agent Carter – Kathryn Immonen, Rich Ellis & Ramon Perez (Marvel / Panini)
Remember that old saying about buses? You know the one that goes something like “You wait for ages and then three come along at once”? Well, the same thing applies if you’re an Agent Peggy Carter fan. Except Agent Carter doesn’t look like a bus and she works in twos instead of threes. Or more accurately, the stories of her adventures seem to arrive as a couple, as hot on the heels of the series-one-over-all-too-quickly, magnificent ‘Agent Carter’ TV series, comes ‘Operation S.I.N. : Agent Carter’, Kathryn Immonen’s fantastic tale of strange ships, doomed alien romance, world ending experiments, shape shifters, espionage, betrayal, a furtive KGB Hydra alliance and a top secret expedition that ventures into the bleak, cold heart of the Russian tundra. And guess who’s caught right in the middle of it all? That’s right folks, Peggy.

It’s a lightning quick story that immediately immerses you in the thick of things and doesn’t let up for a moment; setting a blistering pace that combines incredible characterisation and a riveting, out of this world plot. For some reason that I can’t quite put my finger on, ‘Operation S.I.N.’ reminded me of Mike Mignola’s BPRD, as Immonen shares a similar dark sense of humour and love of adventure, combining as it does forties retro-pulp action and classic science action with hard-edge cold war thrillers in a story that’s given soul and life by the staggering art of Rich Ellis that perfectly captures the period and feel of the unfolding saga. The dialogue is snappy, witty and intelligent and the relationships that slowly build and evolve between the major players add an extra dimension to the story and the gut punch ending and even though it shouldn’t surprise you, due to the nature of the business that Carter and her associates (primarily a certain Mr Howard Stark) are in, it inevitably does Even though it isn’t the sugar-coated, happily ever after finale you might have hoped for, it’s the conclusion that ‘Operation S.I.N.’ needed and it’s the one that’s right for the tale being told. Oh, and before you ask, yes, ‘he’ does make an appearance in a one shot story that explores the nature of the affair that arguably defined them both and how, forged as it was in danger and by death, it was always doomed to fail. Bally good show… Tim Mass Movement