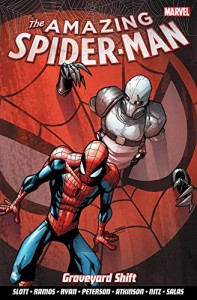 Amazing Spider-Man: Graveyard Shift – Dan Slott, Christos Gage, Giuseppe Camuncoli, Ron Salas, Brandon Peterson & Cale Atkinson (Marvel / Panini)
Even though it’s been a while, it’s still taking me some time to get used to Pete being back in the driving seat and Otto not being in charge of all things Spider-Man related. And I’m not the only one, as in ‘Graveyard Shift’, Pete is still trying to clean up the “mess” (while he alienated almost everyone that Spidey cared about and transformed the wall crawler into a pseudo-fascist dictator, he did set up Parker Industries and made sure that Pete finally got his degree, so I guess it’s case of horses for courses and entirely dependent on your perspective) that Doctor Octopus made of his life. Which is going about as well as most things that Spidey does when not in costume and battling bad-guys and that is, as you’ve probably already guessed, not well at all. But us die-hard Spidey fans wouldn’t have it any other way, because the Parker luck and Pete trying to deal with its consequences are part of what makes Spider-Man, well, Spider-Man, and are more than partly responsible for guaranteeing that the quality control is still turned up to eleven in ‘Graveyard Shift’.

When last we left Spidey, he was fresh from the events of ‘Spider-Verse’ and had also set in motion plans for Parker Industries to bid for the contract for, and build, a Super-Villain containment facility (or prison if you prefer). Which is where we join our illustrious hero as the story begins, battling the Iguana and late to submit his tender, while his new bestie, and Otto’s ex, Anna Maria holds the fort and tries to smooth things over. Then the fun really begins. Having submitted his tender, Pete’s company becomes the victim of industrial espionage as an ex-Thunderbolt is employed to bring Parker Industries to its knees in order to level the playing field, a plan that goes disastrously wrong (or right, again, dependent on your point of view), when the aforementioned Parker luck once again kicks in and brings Pete’s kingdom crashing down around him. While that would be more than enough for your average Joe to handle and would doubtless cause him (or her) to hide away from the world convinced that fate and the Universe hated him (or her), it’s just the tip of the iceberg for Pete as he also finds himself forced to face a half-crazed, determined to take her old life back bit by bit, Black Cat and having to explain to his nearest and dearest, and in on case not so-dearest, why he and Anna Maria have decided to become ‘just friends’. Life is never dull when you’re a fan of the friendly neighbourhood Spider-Man, and with an added team-up, this time with Hawkeye in order to solve the case of a mysterious mobile-phone, ‘Graveyard Shift’ makes sure that the status quo is maintained and that dull doesn’t enter its pages for even a single second. It’s a pure thrill a minute, adventure packed ride that proves when it comes to Spidey, Dan Slott is the man with his finger on the pulse and that Ramos is an art –powerhouse whose visuals will just blow you mind. All together now, ‘Spider-man, Spider-Man, does whatever a spider can…’ Tim Mass Movement