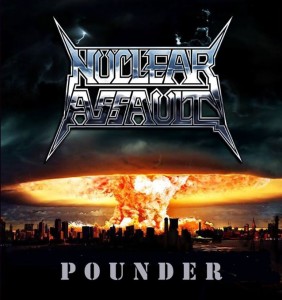 Nuclear Assault – Pounder (Dry Heave)
I’ve always had a soft spot for NA; they possess a certain edge and credibility missing from the Big Four, possibly due to having one foot in the Hardcore scene and the other in Metal. Whatever the reason, NA are something of an institution in thrash metal circles, so it’s good to hear something new from the band, hot on the heels of last years ‘ Live’ from CBGBs’ album. It’s only four tracks but hey it’s new material eh? Opening title track ‘Pounder’ does just what it says on the tin – an old school NA type thrasher that will have the fans who have managed to retain their long locks wind-milling their heads in appreciation. The bands Hardcore influences come to the fore, both lyrically and musically, in ‘Analogue Man in a Digital World’ with the unsettling ‘Died In Your Arms’ closing proceedings – a slow grinder more in the style of ‘The Plague’. While it’s fair to say it doesn’t quite match the intensity of the band’s debut album (‘Game Over’) , ‘Pounder’ is a tidy slice of thrash metal that fans old and new will undoubtedly dig. Ian Pickens

Nuclear Assault – Pounder (Dry Heave)
The mighty Nuclear Assault is about to embark on their final world tour. I am still hoping that will NOT be the case, but with catch phrases like ‘The Final Assault’ it’s rather unlikely I’ll get my way. Not to mourn though as besides this tour for world domination, we get this great EP, ‘Pounder’. Truth be said the production, especially the drums, could have been better but these are four amazing NA tracks regardless. ‘Pounder’ is an ode to the musical style of pure uncut thrash that the band love. ‘The Blind Follow (a.k.a. Lies)’ could almost be lifted off ‘Handle With Care’, which shows the vibe these legends wanted to create. ‘Analog Man In A Digital World’ has that true crossover / punk feeling from the early days, while fourth track ‘Died In Your Arms’ is a bit odd as John Connelly’s trying some different approaches vocally. Definitely a song that requires a more acquired taste. All in all this is a great going-away gift from a band that helped shape my teenage years. Martijn Welzen