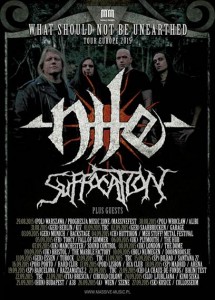 The reigning Kings of technical, brutal and historically themed death metal Nile are very pleased to announce a string of UK dates this September as part of their ‘What Should Not Be Unearthed’ European tour. Special Guests on the tour will be Nuclear Blast label mates Suffocation.
Nile were formed in 1993 on a shared on interest of Egyptian history, culture and lore alongside the ferocity of modern death metal.
Using a symphonic approach to song writing and arrangement, Nile unleashed an uncompromising attack that fused technical death metal with organic Middle Eastern tones. Their unique lyrical bias was inspired by Sander’s interpretation of ancient Egyptian inscriptions, temple carvings, papyri, hieroglyphics and tomb paintings depicting ancient battles, rituals and religious ceremonies.
Nile’s withering live performances are nothing short of legendary.

The band have created numerous legendary technical death metal classics such as their 1996-debut ‘Amongst The Catacombs Of Nephren-Ka’, the hugely successful follow-up ‘Black Seeds Of Vengeance’ (‘album of the year’ 2000 in Terrorizer magazine) and the 2002-release ‘In Their Darkened Shrines’.
With critically acclaimed albums, EPs and several world tours under their belt, Nile have raised the bar for extreme metal bands musically, lyrically and conceptually.
Their most recent release ‘At The Gate Of Sethu’ was released in 2012 to widespread critical acclaim.

Nile’s new studio album will be released this Summer via Nuclear Blast.

Special Guests on the road with Nile are their Nuclear Blast label mates, the un-stoppable Suffocation.
In death metal history Suffocation stands unique for fusing the technical with the percussive, brutal ‘older’ styles of death metal. They are well known for being emulated more than any other band. Having formed in 1989, Suffocation soon released their 3-song debut Re-incremation. Within weeks of its existence came flowing the interest of many labels who wanted to claim their stake to the first Suffocation full length album. Most American death metal painted itself into a corner years ago, but not Suffocation, who through musicality, inventiveness, and sheer conviction, continue to invent ways to push the envelope and inject personality into extreme metal.