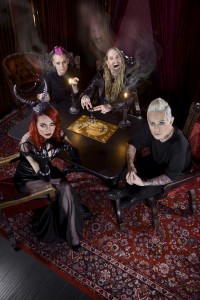 US nu-metal legends, COAL CHAMBER, release new album ‘Rivals’ next week on May 25th via Napalm Records, their first in 13 years!

As well as their upcoming UK headline tour that kicks off this week in support of the new album, the quartet is pleased to announce a series of in-store signings to promote ‘Rivals’.

COAL CHAMBER will be signing copies of ‘Rivals’ at the following stores:

“It’s been 13 years since COAL CHAMBER put out a record. We all worked so hard on this music to make sure the whole album was a stellar push forward for the band and not some nostalgia trip! If you like it heavy and unique you’ll love Rivals! This record is full of crushing huge hooks and big down tuned riffs to move ya. Support Heavy music in all its forms!” so Dez Fafara on the new album of COAL CHAMBER.

Watch the brandnew lyric video for the track ‘The Bridges You Burn’ HERE!

The band’s headline UK tour dates are as follows, support comes from Soil, The Defiled and Dope.
Catch COAL CHAMBER live on tour, when the legend returns to the UK – kicking off this week: